A New Fix for the Nitrogen Problem

Even though farmers don’t blindly follow outmoded aphorisms of the trade, like measuring corn “knee-high by the Fourth of July”, many do still abide by old habits. Some apply manure annually in November regardless of weather or land conditions. Many do their best to adapt to the season’s rainfall, yet treat all their farmland the same way, regardless of how that land varies across acreage. And that hurts their bottom lines—and the environment.

Nitrogen-rich land is crucial to plant and crop growth, and how and when that nitrogen is applied has major ramifications for a farmer’s growing season and for the surrounding environment. Some plants, like soy, can fix nitrogen, even pulling it out of the air. But other crops, namely corn, draw nitrogen from the soil. If a crop like corn doesn’t have enough nitrogen, crop yields drop off. If too much nitrogen is applied in the form of manure or other organic matter, that nitrogen leaches away, lost in water and contributing to hypoxia or dead zones like those in the Gulf of Mexico. Excess nitrogen can also be lost in the form of nitrous oxide—a greenhouse gas that, according to the EPA, can be 300 times as potent for warming the atmosphere as carbon dioxide.

A sustainable agriculture startup has zeroed in on a way farmers can get more precise about their nitrogen management. Adapt-N is a cloud-based software tool used by farmers and agronomists (scientists who advise farmers on soil management and crop growth). The technology uses a combination of intricate models to give real-time suggestions for the application of nitrogen. This means farmers are able to adapt their application of nitrogen to their fields’ needs because the technology allows them to get a better sense of what those needs are. 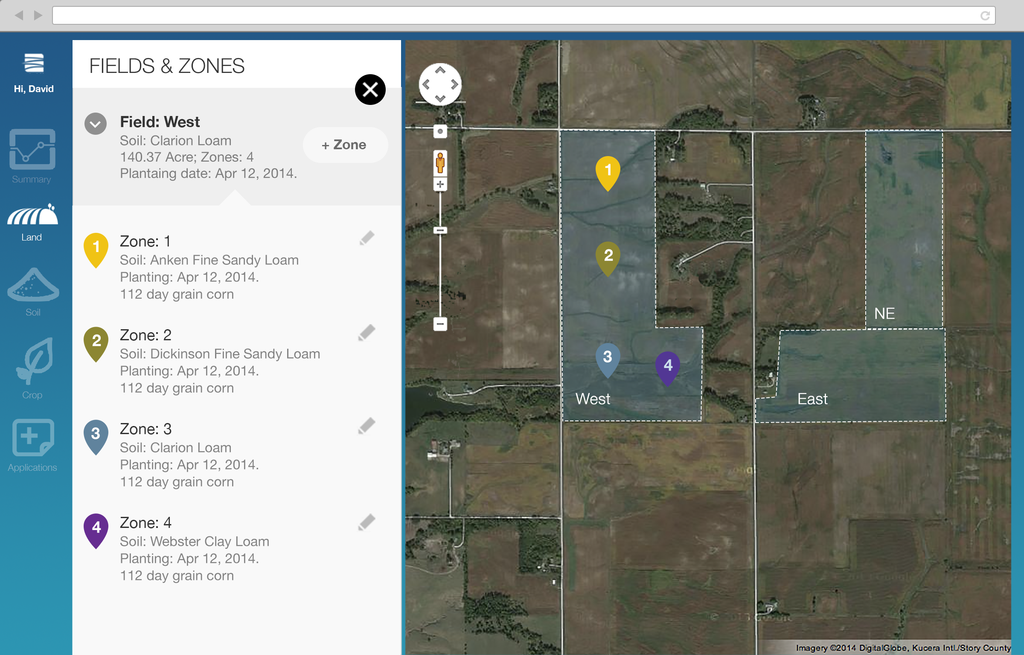 “Nitrogen is extremely mobile as a circulating nutrient, and very difficult to apply appropriately,” says Steve Sibulkin, CEO of Agronomics Technology Corp, the company that made Adapt-N available for commercial use. “If misapplied or if there is a bad weather event, it can be lost into the water.” How farmers manage and till land, how they use cover crops, the slope of the land, temperature, and a broad spectrum of other factors all influence how much nitrogen is retained or lost. Nitrogen fertilizer is also expensive for farmers to buy—and so the ability to use enough, without wasting it, comes with obvious benefits.

Developed through a decade of peer-reviewed research at Cornell University, Adapt-N evaluates field-specific conditions ranging from weather, soil type and slope of the acreage to give precise recommendations for nitrogen application. Since the technology is mobile enabled, it can be used on smartphones and tablets–and it automatically integrates with other software and data tools that agronomists and growers already use to monitor land.

Adapt-N was beta tested in 104 strip trials from 2011 to 2013 in New York and Iowa, and showed average nitrogen reductions of 44 pounds per acre overall. By following Adapt-N recommendations, these farms were able to gain an average of $30 per acre in profit. Given that most farmers in the test group were already using progressive nitrogen management (like sidedressing, this is considered a conservative estimate of the potential widespread benefit of using Adapt-N. 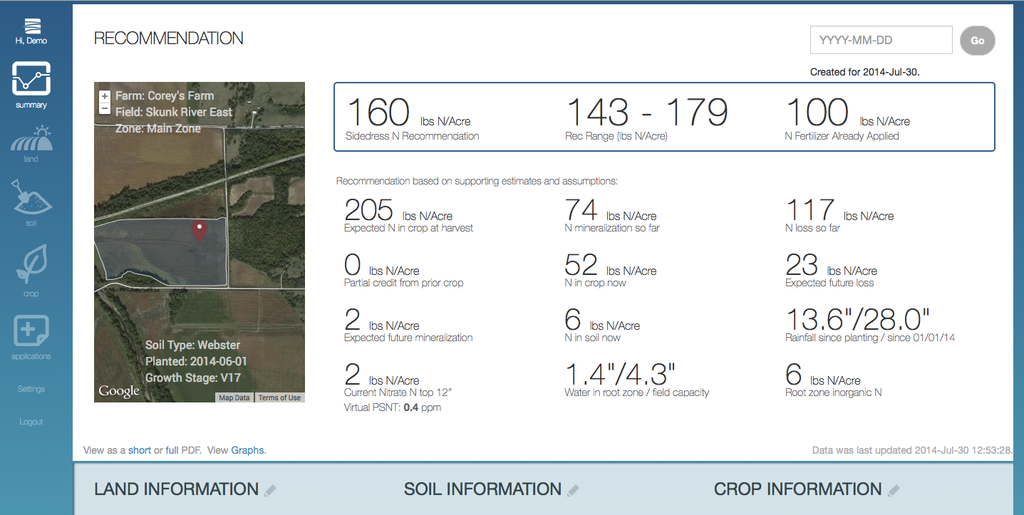 “[Farmers] have a commercial reason to use it, while also having an environmental benefit,” says Sibulkin. This double benefit has certainly drawn the attention of major players.

Walmart named Adapt-N the top-rated nitrogen management tool. The retail giant has been working to take greenhouse gas out of its supply chain and has identified nitrogen as contributing to nearly half of its supply chain footprint. Adapt-N has been lauded by the Environmental Defense Fund and recently was named a winner in General Mill’s Global Innovation Challenge, which aims to reduce the environmental impacts of farming.
It’s no surprise that the software is also attracting competition.

After Adapt-N launched, Monsanto acquired Climate Corp and soon after launched the Climate Pro program, which includes a nitrogen advisor. Dupont Pioneer likewise launched the cloud-based Encirca service.
What differentiates Adapt-N from these larger competitors is its peer-reviewed scientific foundation, third-party validation and the hundreds of agronomists who took part in its development. It also has independence from big-name forces like Monsanto and Dupont Pioneer.

Adapt-N, launched commercially in April 2014, is in fields in 28 states. And with a lawsuit brewing in Des Moines, Iowa, that may set a precedent for holding farmers responsible for nitrates and phosphorus that end up in waterways, farmers may have a more pressing need for nitrogen management solutions in the future.

Farmer and Walmart Triple Bottom Line Commodities member Tim Richter found after using Adapt-N on all his fields in 2013 he was able to get an increase of 40 to 50 bushels of yield per acre translating into about $150 increased profit per acre. Multiplying those average increases over thousands of acres, Richter put it simply, “If this is sustainability, I’m on board.”

RELATED ARTICLES
What Is Precision Agriculture?
An Investment in Organic Farmland
Open-Source Farming

Carbon capture and storage is all over environmental news these days. What is it and why may it play an...
Continue Reading
Innovation

WNDR Alpine is redefining sustainability in skiing with the use of algae-derived products.
Continue Reading
Innovation

Imperfect Foods is one of the biggest sustainable business success stories of the last few years. Here’s how the small...
Continue Reading