Behind the Scenes at a Zero-Waste Event

Earlier this month, as the official Food & Waste Education Partner for the SXSW Eco 2013 conference in Austin, Sustainable America worked to capture and compost food waste from the third-annual event. Well, the numbers are in, and the conference was successful in diverting almost all of its waste—an impressive 97%!—to recycling and composting facilities instead of landfills.

Here’s a look at what goes into corralling a bunch of sandwich crusts and compostable forks into the proper places so it can be recycled into compost rather than go to waste in a landfill. 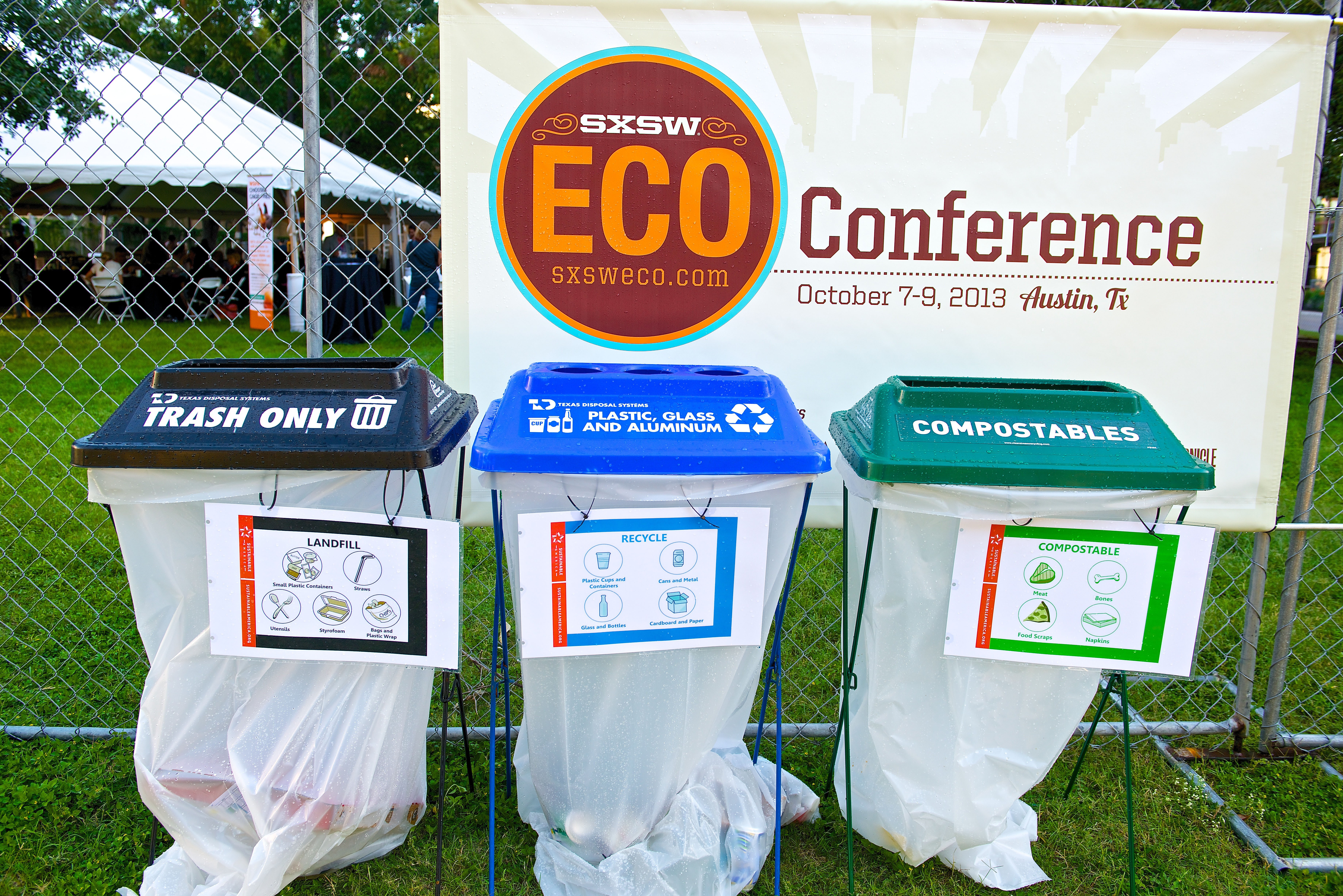 Most people are familiar with sorting their “trash” for the recycling of paper, plastic, metal, but sorting for compost at an event is still relatively new, even for an environmentally-savvy crowd. When confronted with a multitude of bins, some people freeze up. Is my fork compostable? What about this chicken bone? Does my napkin go with the paper or the food?

So we started by clearly marking the bins with friendly icons to help event goers sort things out. But as we learned through our food waste efforts at Stamford, Connecticut’s Live @ Five concert series, people don’t always take time to read the signs. We had to come up with something more in-your-face. Our high-tech solution? Foam fingers.

At SXSW Eco, the hands waving those foam fingers belonged to a few of our staff members and a big crew of volunteers from the Texas State McCoy College of Business Administration chapter of Net Impact. Twenty-one students and faculty signed up to volunteer, and several more showed up throughout the week as word traveled through the group. They had a lot of ground to cover — waste was sorted at the main venue, the Austin Convention Center, as well as 10 events at eight satellite locations in Austin. Depending on attendance, venues had between five and 10 “eco stations” where waste was sorted to compost, recycling and trash.

The volunteers eagerly donned the Sustainable America t-shirts, hats, and foam fingers, and directed patrons on sorting their food waste. Texas State has a highly active chapter of Net Impact, a nonprofit that supports young people in who want to use their careers to make transformational social and environmental change. (They learned this month that their chapter earned the honor being one of the top three in the world.) We at Sustainable America are deeply indebted to Dr. Janet Hale, the group’s advisor, and the Net Impact volunteers, and honored that they elected to partner with us for SXSW Eco.

Once the sorting is done, everything must go somewhere. In this case, it all went to Texas Disposal Systems. Jason Sanders, TDS’s recycling and composting coordinator, worked closely with our staff in advance of the conference in planning for each of the venues. During the conference, Jason ensured that the stations were delivered, set up, retrieved in a timely fashion, and returned to TDS for sorting.

TDS is somewhat unique in that they process all three streams of waste, through composting, landfill, and a MRF (acronym for Materials Recovery Facility, pronounced “murf”). Their dedication to sustainability is impressive. Jason gave us a tour of their operation, which extends from a wild animal park for rescued exotic animals to an area where waste is first received and staffed by a team (including a mechanic) that salvages everything from old doors to toys to small machines and appliances. These items are diverted, repaired if possible/necessary, and then resold rather than being buried in the landfill. In 2008, TDS was awarded Gold for excellence in Landfill Management by the industry association Solid Waste Association of North America.

Together, the people from SXSW, Jason Sanders, Dr. Hale and the Net Impact volunteers were instrumental in our success in diverting 97% of the waste generated to either composting or recycling. It was truly a team effort, and we are as pleased with the results as we are with the knowledge gained and the partnerships we were able to build.

From food bloggers to chefs, podcasters to activists -- these Indigenous food system changemakers should be on your radar for...
Continue Reading
Food System