Pollinators like bees, insects, bats, and birds are crucial to keeping our ecosystem—and food system—humming. Unfortunately, reports of declining pollinator populations have serious implications when you consider that 75 percent of the world’s flowering plants rely on pollinators for reproduction. Planting pollinator gardens, avoiding pesticide use, and buying local honey are important actions you can take to support pollinators, but here’s another idea to add to the list: reducing light pollution.

In humans, artificial light at night has been found to suppress melatonin production and disrupt our circadian rhythms, which can increase risks for obesity, depression, sleep disorders, diabetes, breast cancer and more. Other species’ sleep and wake cycles are also regulated by melatonin, which means artificial light has an effect on all creatures big and small, diurnal and nocturnal. Nocturnal creatures do need some light at night, but they use the natural light of the moon and stars for orientation, navigation, avoidance of predators, location of food and reproductive behavior. Artificial light can mask that natural light and confuse them. 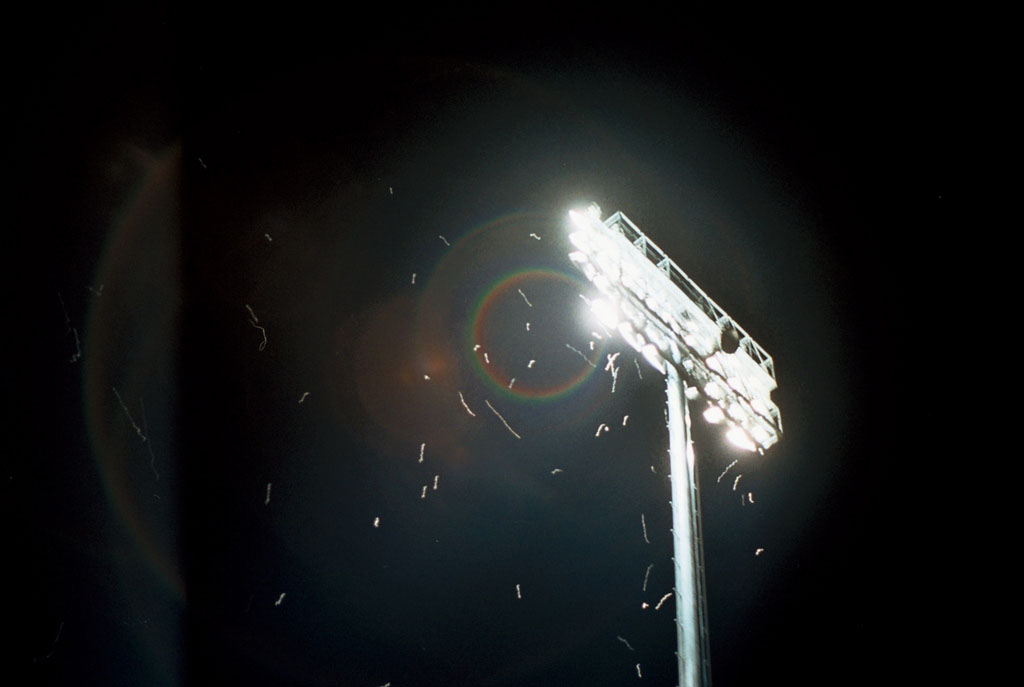 “We are just discovering how broad the problem is, particularly with the advent of high brightness white LEDs,” says Pete Strasser, technical director of the International Dark-Sky Association. “The nocturnal habitat has never had the amount of short wavelength, ‘blue light’ exposure that it now experiences, and we are only now beginning to see and comprehend the consequences this will have on plant and insect interaction.”

A recent study by scientists from the Leibniz-Institute of Freshwater Ecology and Inland Fisheries (IGB) in Germany analyzed all recent studies on how artificial light affects insects. They found strong evidence that insect populations are affected by light pollution and made a case for adding it to list of more widely researched causes of insect decline like climate change, pesticides and land use changes. Even remote agricultural areas that may seem “dark” are affected by skyglow, light pollution scattered in the atmosphere that can reach hundreds of miles from its source.

As anyone who has a porch light knows, insects are attracted to and seemingly hypnotized by artificial lights. When they collect around lights, it removes them from their natural ecosystems, exhausts them and makes them easy prey, according to the IGB study. Artificial light can also fragment insect populations, leaving them vulnerable and less resilient. “Effects on individual species and species interactions are likely to be complex, depending on light intensity and spectrum, season and species, and are therefore hard to predict,” wrote the study authors, who also said that more research in this area is “urgently needed.”

Many of the most important pollinators for food crops, like bees, are active during the day, but studies show that artificial light at night disrupts their day and night cycle, which can affect reproduction cycles. Some nighttime pollinators, like moths, may not pollinate important food crops, but they do pollinate a variety of plants that are part of our ecosystems. The yucca plant, for instance, is pollinated by a single nocturnal moth species. “What will happen with so much blue light and the moths?” says Strasser. “Will they be attracted by it, or will they avoid it? In both cases pollination is disrupted. We simply have not had enough time and resources to evaluate all that is happening outside when the sun is down and the lights are off.”

What You Can Do
While more research is still needed on the effects of artificial light on pollinators, there are other good reasons to reduce light pollution. Artificial night light affects other types of wildlife, it wastes energy and money, and it robs us of the ability to view the true night sky. Some may feel like night lighting is necessary for safety, but there’s no clear evidence that outdoor lighting reduces crime.

If you have a garden, you have even more reason to be concerned about light pollution. Artificial light has also been shown to have effects on plants, and urban and suburban gardens are more likely to be exposed to artificial light than farms in the country.

“The best thing urban gardeners can do is replicate nature and keep the lights off and out of your garden,” said Strasser. “By doing this we can give islands of darkness to the nocturnal habitat, where darkness has been the default condition for eons. You can start helping tonight in your own yard.”

Here are some more tips from the IDA for doing your part to reduce light pollution:

• Use the right amount of light. Too much light is wasteful and impairs vision.

• Use long-wavelength lights with a red or yellow tint to minimize negative health effects.