Raj Patel is an award winning writer, activist and academic concerned with how to feed the world. He saliently points out that more than 1.5 billion people worldwide are overweight and another 1 billion are going hungry. We are producing enough calories, but not nourishing the world. There is something clearly broken about our food system. 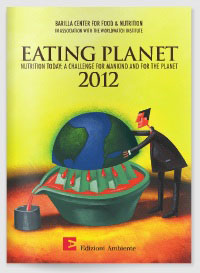 Just published by the Barilla Center for Food & Nutrition, Patel’s book Eating Planet—Nutrition Today: A Challenge for Mankind and for the Planet describes five main reasons for the failures of the system and proposes critical policy responses.

His reasons for the failure of our food systems:

1. Global weather change - unpredictable and irregular weather patterns combined with more frequent and intense storms have cut the wheat harvest by 5% over the last 30 years.

2. Food vs. Fuel - the use of land and resources to grow crops for biofuel has increasing come to compete with crops available for human nutrition.

3. The Western style diet - heavy on meat and dairy the Western diet requires more land for animals to graze and the grain to feed them.

4. Financial Speculation - Patel believes that the creation of a commodities market for food has increased both price swings and cost of food.

5. High Oil Prices - the increasing cost of oil has driven up the cost of both production and transport of food.

Patel believes that governments have been mostly ineffective in addressing these issues while the more innovative solutions can be found at local, municipal and sub-national levels. While some of his ideas are up for debate, the main thrust of his argument stands firm, the worldwide food system is not serving to feed the world in an equitable manner.

With 7 billion inhabitants of planet earth and growing, it will take concerted and collaborative efforts on the part of the public and private sectors to envision and enact viable solutions to feed the planet into the future.

For more on how the generally overweight Western world consumes resources, check out our post on Oil and the Weight of the World.