A highly respected research provider, Cornerstone Analytics has allowed us to republish a preview of their 2013 Global Oil Capacity Forecast, originally published August 23, 2012. The outlook is not good for global oil balance, which likely means even higher oil prices, and bouts of global economic malaise. Some of the numbers here are pretty shocking. Sustainable America’s mission is to address the current insecurity of our food and fuel systems in America, both of which are overdependent upon fossil fuels. Becoming more aware of the current and coming issues in this arena is the first step towards taking personal action to shift the tide toward more sustainable food and fuel systems in our country.

The following article is republished by courtesy and permission of Cornerstone Analytics. 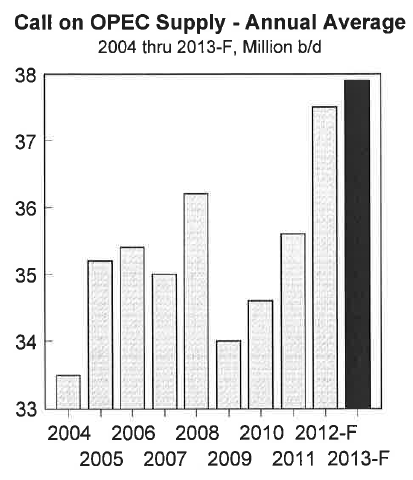 The current tightness we see in the global oil balance does not look to abate in the coming year even with a working forecast for global oil demand growth to be halved in 2013, based on our work detailed in this report. Our supply demand model (shown quarterly from 2008 through 2013) is detailed on pages 2 and 3. [Editorial note: We have omitted pages 2 and 3 of this report, which detail the dense numbers that give rise to the conclusions in this report. Pages and pages of numbers don’t suit the blog format well. Please contact Cornerstone Analytics if you would like to view pages 2 and 3.] Aside from the obvious breaking out of Canada in the non-OPEC supply section of the tables, the figures reflect changes in the level of total non-OPEC oil production back to 1998 which were recently detailed by the IEA. In this regard, for 2013 we forecast non-OPEC output will average 53.7 MM b/d or a net gain of 0.5 MM b/d from the expected 2012 figure. This is about 200,000 b/d below the current concensus forecast and well below the 1.2 MM b/d growth rate from the initial consensus projection. Global oil demand growth of 1.0 MM b/d next year assumes “zero” gains from the OECD as was the case for 2012. Our 2013 global demand figure assumes no further upward revisions in 2012 numbers – which is questionable given the pattern so far in ‘12 including early 3Q rates.

The call on OPEC crude for 2013 is forecast to rise by about 300,000 b/d from this year’s projected average – again, assuming no change in the 3Q or 4Q demand figures from what’s currently forecast. Projected gains in OPEC’s NGLs and condensate production for 2013 are, by us, put at 200,000 b/d as detailed in the table. A major question for next year is, of course, Iran’s oil output which is already crimped by 650,000 b/d – a forfeited volume of oil which was not built into the total world supply forecast for 2012. Usable spare capacity in OPEC remains razor thin, literally, a phenomenon we think has been “lost in the sauce” to many market observers. In point of fact, many we speak with almost seemed shocked when we highlight that with OPEC – and Saudi Arabia, in particular – pumping at full bore, world crude oil prices are back at $115/bbl despite overwhelming concerns in the broad financial market about Europe (and global) recession.

THE OIL MARKET DOES HAVE A JOB TO DO…
Based on our oil balance work and, specifically, the assessments about continued pressure on available oil production capacity, we remain of the opinion that this bull cycle in oil will have to have its phases regulated by bouts of global demand destruction… which, unfortunately, for many means bouts of global economic malaise. Because the use of oil globally is highly inelastic, the “substitution” card does not seem a viable path (when we hear about a commercially viable version of ‘fusion in a jar’ we’ll reconsider the stance). To destroy demand at this point, we still have to frame out the argument in the context of a “high” enough oil price to stagnate economic (and oil demand) growth. The figures below assess the necessary price of crude that pushes the oil burden up to the same peak as 1979-1980 levels which we target since that is the last time we saw non-OECD oil demand growth stagnate (and non-OECD growth continues to sit in our crosshairs since those countries are literally the engine of demand gains – they have been for the past 20 years).