How CSAs help small farmers during times of drought

Sustainable America spoke on the phone with farmer Tim Huth, of LotFotL (pronounced like “hot bottle”) Farm in Elkhorn, Wisconsin, about the drought of 2012, and how the farm’s CSA has helped them weather the heat. 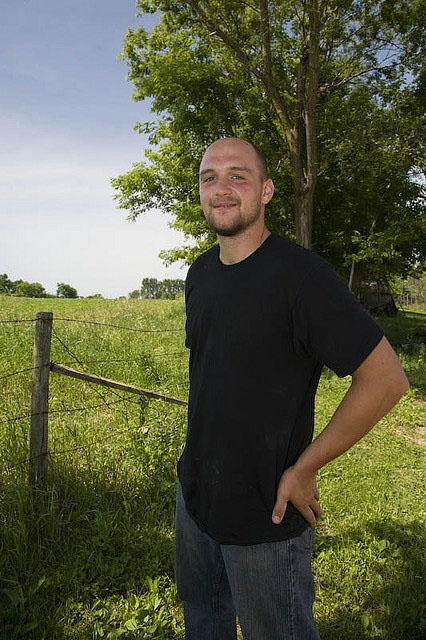 Tim Huth got into farming as a student at Carroll College in Waukesha, Wisconsin. As a student at a small private university, Tim says, “I had my awakening period, seeing this world that we live in as a much more complex place with some really distinct opportunities and really distinct issues that people don’t focus on. One of those to me was agriculture. I learned that the average farmer was 65 years old, that so much of what we grow just feeds animals.” Which is fine, according to Tim, but he saw opportunities for farming to feed people more directly. “I just started finding places in college where I could grow pretty large gardens and I could kind of learn how this all works,” he says. He eventually moved to a farm to get more hands-on experience, and then started LotFotL in 2007. LotFotL now has 20 acres in vegetable production, harvesting 60 to 90 types of simple crops every year. They also raise Berkshire pigs on pasture.

Huth started LotFotL’s CSA in 2008, which now has 350 member households. He says this model of selling produce directly to consumers is helping his farm survive the drought. Here’s how:

1) Members share in the financial risk.
Huth describes a CSA as first and foremost a marketing model. “It’s the way in which we sell our products, and it’s the way we tell people about who we are,” he says. All farms handle their CSAs differently, but traditionally members pay the farm at the beginning of the year for a season’s worth of produce. In many ways a CSA is like investing in a farm, with the return of principle paid in food. So, like investing, there is risk involved, but it’s carried by the entire membership, not the farmer alone. In times of drought, members know that their returns might be less. Likewise, when there is a bumper crop, they share in the bounty.

“We have done the numbers every year… and [the CSA price is] just about midway between what we would sell to a grocery store or restaurant and what we would sell at market,” says Huth. “Yeah, we know we are losing a little bit on our highest price of retail, but we are selling volume. We are selling secured volume up front. So that’s good for us, and, we think, for our members.”

2) CSAs encourage diversity.
“It’s not as easy to see, but a CSA requires you to be really diverse as a farmer,” says Huth. CSA members expect a variety of produce. So instead of relying on a handful of crops that could all have low yields in a drought, diverse plantings help mitigate a farmer’s risk. For example, this is a great year for tomatoes at LotFotL, due in part to management strategies employed by the farm. “We got our tomatoes out much earlier, they were timed well,” says Huth, “but the big advantage to this dry weather with tomatoes is that we don’t get all the disease pressures that wet, humid weather always brings. We have never had a tomato year like this. The plants are generally healthy, and we don’t have the concern of a big rain coming and all the fruits cracking from too much water. That highlights to me what every home gardener knows: Almost every year it’s a really bad year for something and a really good year for something else. You can’t count on every year being a good year for everything, and sometimes you get lucky. So the CSA forces us to be diverse, which means that we have more balls up in the air, and we know that we are going to drop a few, but as long as we can catch most of them we have abundance.”

“The diversity is problematic too,” Huth says. “The more diverse you are as you get bigger, the more specialized your equipment set can become and the larger your equipment setup can become. That’s an advantage, though, because it encourages us to build our asset level. It will never be a cash-rich farm, but we can very well be a balance-sheet-rich farm with a lot of equity in equipment.”

The diversity also opens up new opportunities. As Huth talks to restaurants and grocers and discovers what they might be interested in, in most cases he has already had some experience growing those items for the CSA. “So if we decide that we want to take on a potato crop like we are for Beans and Barley in Milwaukee, we have grown them for enough years for the CSA that we know how to scale it up a little bit quicker.”

3) CSAs can generate guaranteed income throughout the year.
CSAs have traditionally required full payment for the season upfront. As a person new to business and managing money, it was tough for Huth to spread the farm’s money throughout the year at first. “We would always have a financial hole in August, where the CSA money was pretty well drying up,” he says. But new CSA management services like Farmigo, CSAWare, and MemberAssembler are changing that model. These websites manage all of the transactions of a CSA and provide other organizational tools and resources. LotFotL uses Farmigo to allow CSA members to pay month to month throughout the year instead of in a lump sum up front. “It allows us to put away a 20th of our annual income and get that back out month to month all year,” says Huth. “A lot of CSAs have adopted that model.” For those consumers who want to join a CSA, but may not have the annual $500 to $600 lump sum, the ability to pay $40 to $60 a month is more feasible. This opens up a whole new market to CSA farms.

Huth says the effects of the drought this year have been as psychological as they have been physical. “Usually I’m really excited about going into the field and scouting things out, and seeing how things are doing,” he says. “This year I’m sort of scared to go out and look.” But Huth says the outlook for his farm is still hopeful, “The CSA of course, for me, makes that better. It means I’m going to be able to live to farm again next year. We have that financial stability.”

Sustainable America is devoted to helping American farmers like Tim Huth. One of the best ways an individual can help is by joining a CSA. Use Local Harvest’s CSA finder, or Farmigo’s website to find one near you. You can also take action with our post, Six Ways to Help Your Local Family Farmer.