This past summer, Imperfect Foods turned six years old. What may have seemed like a Bay Area niche has flourished into a $200+ million national company who raised Series D funding earlier this year. In many ways the anniversary marks a change in how society views “food waste”.

Imperfect got its start rescuing and redistributing produce to subscribers in the Bay Area, not only filling an ugly produce niche, but tapping into an unmet market. From the beginning Imperfect was led by the desire to eliminate food waste and educate consumers on their philosophy of wasting less and using more.

Since its launch Imperfect has grown to serve 400,000 customers across 38 states, and expanded in 2019 to rescue and redistribute food across multiple grocery categories. Sustainable America thought we would step back and say happy birthday by celebrating a few of Imperfect Foods sustainability accomplishments.

Imperfect now employs over 1,600 team members across the country with jobs that improve the sustainability of communities. They also created new sales outlets for more than 1,200 farmers for items previously thrown away, left in the field, or sold for a fraction of their worth.

Industry specs often dictate the sales of items. If an item has an irregular shape, color, or size, it might not have a market at a traditional retailer. By teaching consumers that visual defects often do not influence taste, they are able to change perception and acceptance. One example is the size of many varieties of stone fruit impacted by droughts in California. Peaches and nectarines end up smaller but more flavorful because of this lack of water.

In 2019, Imperfect Produce became Imperfect Foods as they moved beyond just produce items and incorporated shelf-stable goods, dairy, meat, and seafood. The expansion came as a demand from consumers who sought to purchase more through their subscriptions and suppliers who now saw a potential home for other food going to waste.

Many of the items were packaged foods previously rejected by sales streams because of their “best by” or “used by” dates. Many of these products still have 30, 60, or 90 days left, giving Imperfect ample time to directly distribute. Language and policies around date labeling are also often criticized by the larger food system community which Imperfect has helped bring into consumer sight. 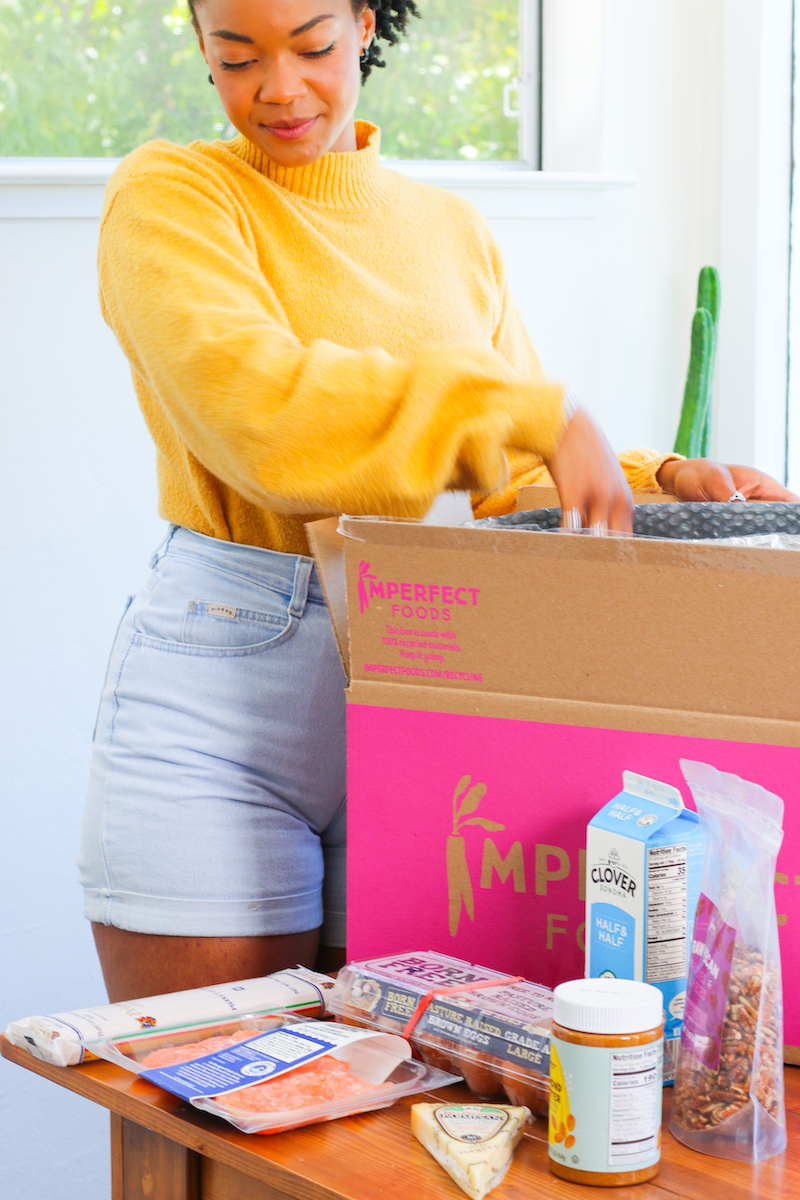 This year, Imperfect launched their Packaging Return Program, becoming the only national grocer to pick up gel packs and insulated liners from consumer’s doorsteps. The program hopes to divert six million pounds of packaging materials from landfills each year.

Imperfect also looks to eliminate or reduce packaging from items unless it is absolutely necessary. Many items come without packing and when packaging is necessary they seek out materials produced from recycled inputs. Imperfect boxes are made from 100% recycled fiber and all of the ink and glue in their boxes is non-toxic, biodegradable, and compostable.

Committed To Becoming A Net-zero Carbon Company By 2030

Along with a number of other companies, including Microsoft and Burger King, Imperfect announced in 2020 their commitment to becoming a net-zero carbon company in ten years. To reach this goal, they plan to convert their fulfillment centers to 100% renewable power by 2026, operate a fully electric vehicle fleet by 2027, and have a number of certified zero-waste-to-landfill facilities by 2025.

What is V2G or Vehicle-to-Grid technology for electric cars?

Learn how your electric vehicle could help power the grid while your car sits in the driveway.
Continue Reading
Innovation

Carbon capture and storage is all over environmental news these days. What is it and why may it play an...
Continue Reading