They may not go from zero to 60 in less than three seconds like a Tesla, but enormous electric trucks are generating excitement on northern Minnesota’s Iron Range.

Utility Minnesota Power has proposed a pilot project to state regulators in which it would help the region’s iron and taconite mines acquire heavy-duty electric vehicles to help shrink their carbon footprint.

Frank Frederickson, vice president of customer experience, said the utility has been collaborating with mine customers on the idea. The trucks are manufactured by Caterpillar and Japanese firm Komatsu, along with a handful of other companies. They operate either using a mix of electric and diesel-based energy or use a trolley system. The trolley approach allows the trucks to rely more on electricity but requires the installation of more infrastructure at the mine.

Several mines around the world have electric trucks operating but few are located in the United States.

Studies suggest the heavy-duty trucks modestly reduce carbon emissions from mining. Sales information for the Caterpillar model the 795F AC claims a trolley system leads to a 90% reduction in diesel use. A pilot using electric Komatsu mine trucks in Finland showed as much as a 15% reduction in greenhouse gases. But those numbers could grow as electric trucks replace diesel-powered vehicles.

Switching heavy machinery from internal combustion engines to electric battery vehicles has presented enormous barriers. Just a handful of transit buses and one school bus operate on electric batteries in Minnesota. If an enormous, 20-foot-tall mining truck can be electrified, though, other products that have long relied on gas could eventually transition to electricity, too.

“It’s a delight to see that this work is marching on in other parts of the economy, as the public discourse has mainly been around passenger vehicles,” Bains said. “I’ve been pleasantly surprised … to see heavy industry electrify for reasons of cost savings, lower battery prices and health considerations due to emissions.”

A McKinsey & Co. report found large potential for battery electric vehicles in the heavy equipment market and greater investment in the nascent market. The total cost of ownership for heavy electrified vehicles is 21% less than a vehicle running on an internal combustion engine for some equipment types and their performance “is superior … in several aspects including better maneuverability and drivability, with instant torque and independent wheel control, and significant synergy potential with automation and connectivity.”

Electric mine trucks could also take advantage of Minnesota Power’s growing portfolio of renewable energy sources that next will soon generate half its electricity. “We’re looking to see what are the ways that we can take our advancements in renewable electricity with the advancements in heavy truck electrification to help our clients create a more economic but also a more environmentally friendly mine operation,” Frederickson said. 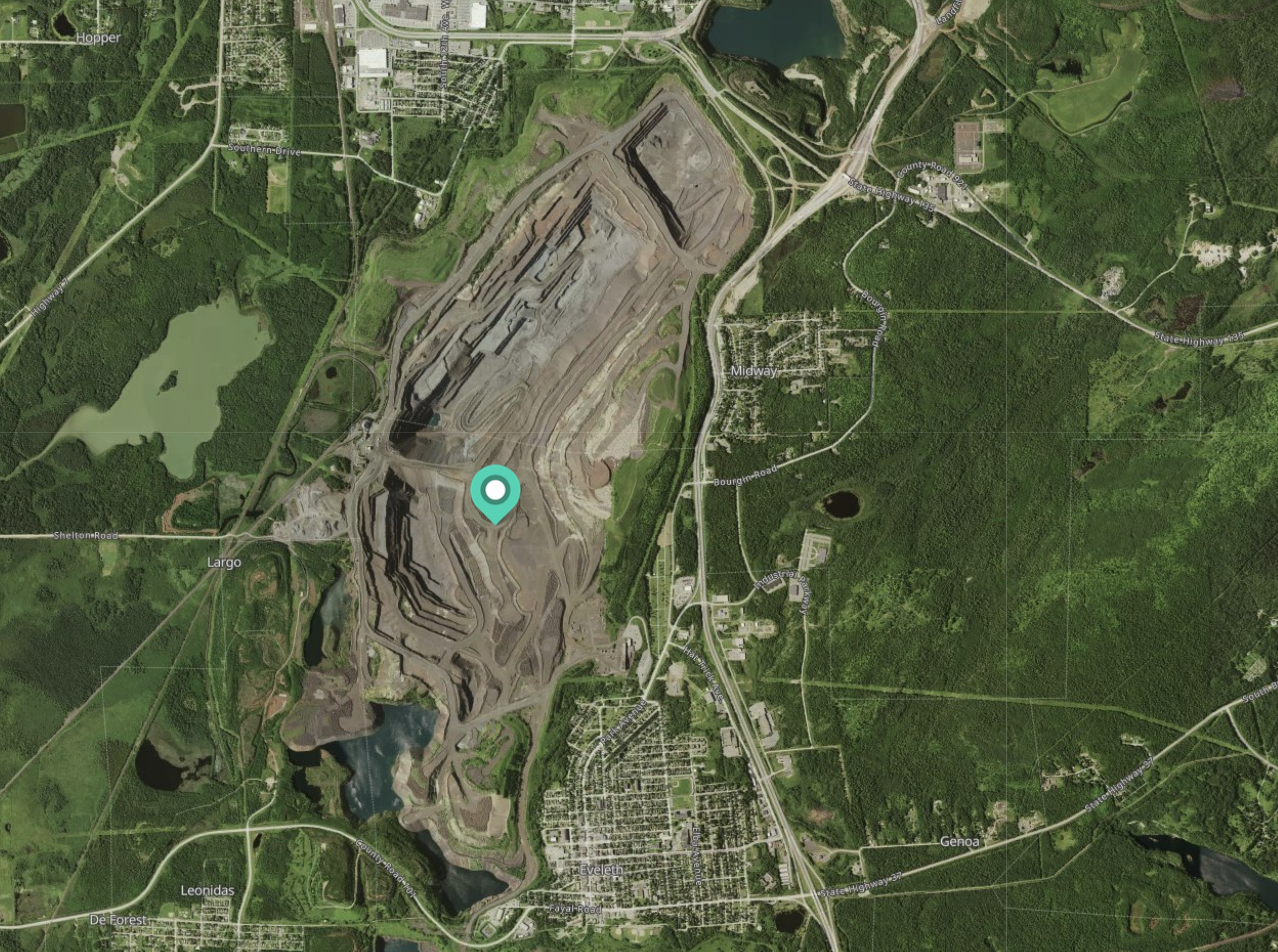 Satellite View of the Thunderbird Iron Mine in Eveleth, Minnesota. Screenshot from TheDiggings.com via OpenMap.

Electrifying mining trucks will not be easy or cheap. Only a handful of mines in the world have even begun to switch to electric trucks and many of those retrofitted existing vehicles, an attractive option for Minnesota mines, he said. The capital to invest in the truck may not be available because of the economy’s pandemic decline. Yet Minnesota Power sees tremendous upside in mine transportation electrification. Large industrial customers consume more than three-quarters of the utility’s electricity, likely the highest proportion of any power company in the country. By moving mines away from diesel and toward electric power, they grow demand in a region that has long faced a challenging resource-driven economy.

Minnesota Power brought up the proposal in a filing before the commission that offered a series of projects to help jumpstart the economy, including other transportation electrification projects. The region has seen some progress on transportation electrification, with the Duluth Transit Authority being the first bus system in the state to operate electric buses. The utility’s industrial customers have climate goals and electric mine trucks could help meet them, Frederickson said.

Komatsu’s letter of support said the company had 160 electric mine trucks with trolley systems operating today, with requests for more than 100 units over the next three years. Signed by two executives, the letter says trolley operations reduce greenhouse gases, increase productivity and cut operational costs.

Frederickson said mines have generally started investing in electric trucks by retrofitting existing diesel fleets. Komatsu’s pilot with a Finnish mine converted 13 diesel trucks to electricity, reducing carbon emissions by an estimated 9% over the life of the project. A Komatsu pilot in Sweden found that with a trolley system, electric models move faster than conventional trucks and decrease diesel by as much as 50%.

Minnesota Power plans to evaluate the truck mine market and their mining customers before investing in equipment from one of the vehicle manufacturers, Frederickson said. The pilot will study a plan for retrofitting existing mine trucks with electric equipment, a strategy allowing more vehicles to transition to electricity.

A successful pilot could transform the industry by capitalizing on other emerging fields, such energy storage that capture less expensive energy overnight for use later to power mine trucks. The utility’s industrial rate structure may have to change to encourage electrification, he said.

Once a small player in the mining industry, electric mine trucks appear poised to grow their market share. “I think the technology itself has come a long way and it’s very promising,” Frederickson said.

This piece is republished from Energy News Network under a Creative Commons license. You can read the original article in its entirety here.

Frank Jossi is an independent journalist and consultant based in St. Paul and a longtime contributor to Midwest Energy News and Energy News Network. His articles have appeared in more than 50 publications, including Minnesota Monthly, WIRED, the Los Angeles Times, the Minneapolis Star Tribune and more.

Veles is a new household cleaner made entirely from food waste—and is living a sustainable mission from start to finish....
Continue Reading
Innovation

From at-home solutions to commercial integrations, here are a few innovative technologies from CES 2020 that may help fight food...
Continue Reading