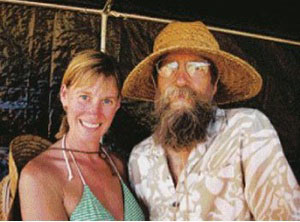 His name is Sun, and he is an organic farmer. Living off the grid, growing myriad vegetables on the island of Kauai, Sun is the living image of what you might expect of a fairytale farmer: big beard, big glasses, big straw hat. With his apprentice Lisa Fuller at his side, One Song Farm has become legendary on the island for their success at turning clay-hardened soil into gardening gold.

Once a carpenter managing big jobs in Southern California, Sun moved to Kauai several decades ago and leased some land to begin farming. Rather than just planting seeds, he began tending the soil itself. He started using a technique he calls “double digging” in which the tough soil in each vegetable bed is hand dug down to two feet and then worked with lots of rich organic compost and worms. It’s an admittedly intensive process but one of the secrets to Sun’s long term success. And as he explains, “After about five years it’s a piece of cake. There’s no more tilling (the soil), you just throw seeds at it.” 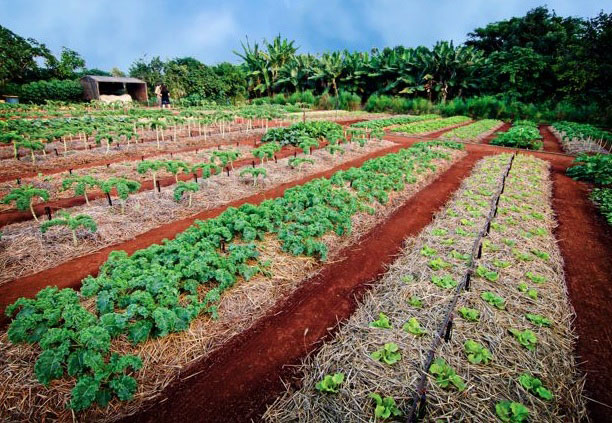 When Sun first moved to Kauai, he was told that organic farming would never work on the island where large plantation style agriculture had always ruled. Undaunted, Sun charged ahead, his credo “The difficult we do right away, the impossible takes a little bit longer. Once you give the plants what they need, like the right variety, in the right soil, you are going to have produce that you simply can’t believe is so-o-oo good.”

In keeping with Sun’s strong ethic of maintaining a low carbon footprint, the produce grown on One Song Farm can only be found at locally owned grocery stores and farmers markets on the island of Kauai. Recently, One Song Farm hosted a dinner at the farm with foods grown on the farm in concert with local Kauai sommelier and farm-to-table advocate Colin Darrell. Darrell is founder of the Grow Culture initiative, a Hawaii state wide virtual farmers market that aims to connect farmers and consumers in innovative ways online.

To further his organic cause in the islands Sun, along with another local organic farmer Phil Sheldon, created HOFA - Hawaiian Organic Farmer’s Association - which certifies organic farming under the USDA’s National Organic Program Federal Organic Rule.

Clearly living his own labor of love, Sun has built an organic legacy on a beautiful, remote tropical island, which is definitely worthy of storybook status.

A Toolkit for Strengthening Your Local Food System

Build a better local food system in your community by downloading our toolkit filled with ideas and helpful resources, whether...
Continue Reading
Food System

Mapping How Food Gets From Farms To Homes

Researchers at the University of Illinois at Urbana-Champaign have made a visual map of the U.S. food supply chain.
Continue Reading