Our Fuel Gauge Is Broken

At Sustainable America we find this article from 13D Research interesting and important in light of the gas shortages seen in the wake of Hurricane Sandy. We believe it helps highlight the vulnerabilities of our fuel supply system, and the need for reducing our reliance on oil for transportation uses. The article discusses the rationing of gasoline in New York and New Jersey. Rationing has ended in these states since the original publication date of this piece.

The following article is republished by courtesy and permission of 13D Research.

Yet another sign of the dangers of complacency—our fuel gauge is broken. This is another bit of wisdom that came to us from the late Matthew Simmons, who long ago pointed out the risks facing the nation’s gasoline supply. The current gasoline queues and rationing programs being administered in New York and New Jersey —which we predicted as far back as WILTW May 29, 2008—may or may not be a sign of an impending global shortage of oil. However, one thing is abundantly clear—they are very much a sign that our fuel and energy supply system has no margin for error and is susceptible to any number of natural or man-made catastrophes. The litany of evidence bears repeating here because there is so much needless suffering playing out in the aftermath of Hurricane Sandy, while the political class—not to mention Wall Street and Big Oil—have repeatedly told us there is nothing to worry about because we have so much shale oil, shale gas and hybrid vehicles to save us, rendering the notion of “Peak Oil” essentially meaningless. But what if they have underestimated the impact of global oil supply constraints, just as they underestimated the impact of this and other serious catastrophes?

Mother Nature has been sending important messages for some time: 1) Sustainable effective OPEC spare capacity has remained stuck at around 2 million bpd or less for most of the last decade, outside of the brief period following the Global Financial Crisis. 2) Crude-only production has been effectively capped at 74 to 75 million bpd for almost eight years. 3) Roughly 40% of the world’s global oil supply comes from the MENA region, which is subject to multiple armed conflicts, civil unrest and rapid internal-consumption growth. 4) More than 20 major countries are well past their peak rates of oil production, while only a small handful—the U.S., Canada and Iraq among the most significant—have been able to demonstrate any meaningful and sustainable growth in recent years. 5) The price of Brent crude oil has risen more than fivefold since the beginning of 2002, after averaging a mere $21 a barrel over the prior 20 years.

Shale oil notwithstanding, the U.S. is more reliant on imported oil now than it was at the time of the Iranian Revolution in 1979. The following chart was recently posted on the Energy Bulletin website, and shows quite clearly that even though U.S. oil production has risen to its highest levels since the mid-1990s, the difference between consumption (red line) and production (blue line) is wider now than it was during the late 1970s. This begs the following question: Which seems more likely to happen first: Will shale oil in the U.S. be able to close the gap with consumption by 2020 or will a serious disruption take place in the MENA region, seriously crimping global supplies? Our bet is on the latter. 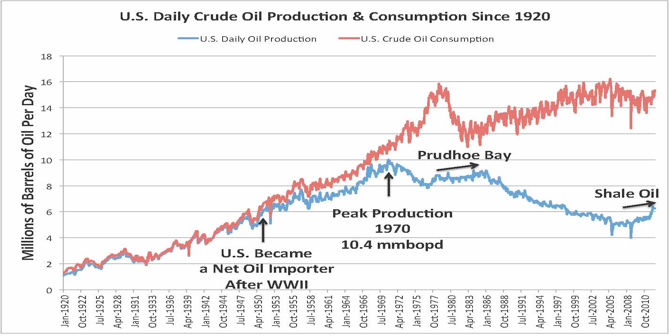 Occidental Petroleum CEO, Stephen Chazen, underscored our oft-repeated mantra that unconventional oil drilling either is too costly or the wells decline too rapidly to rely on it to provide sustainable output growth. While discussing his company’s drilling reduction in the Bakken Shale, he said the following: “We aren’t drilling as many shale wells as somebody would like. And the reason is, and it goes back to this capital efficiency question if I could bore you for a second. [A] shale well has a very high decline rate maybe 30%, 40% the first year, maybe more…So I can boost this year’s production by drilling a bunch of shale wells, but in order to keep the production flat next year, my capital program has to go up because I’ve got to drill more wells.”

The recent gasoline shortages in the New York area remind us of an interview Matt Simmons gave to Jim Puplava of Financial Sense Online in 2006. Few people understand that there is a lot of guesswork that goes into the petroleum inventory figures. According to Simmons: “We don’t have a fuel gauge that basically says, ‘oh, we’re almost empty’… At various times when I’ve been speaking at fairly large groups I ask a question, ‘is there anybody in the audience that’s run out of gas, please raise your hand.’ It’s amazing but about 75% to 80% of the people in the audience always raise their hand. Almost everyone has had the indignity of sooner or later forgetting to look at the gas gauge and running out of gas. And you can be driving 75 miles an hour and one second later your car stops. We have gauges, but we forget to look at them. Here [i.e., petroleum inventories] we don’t have a gauge.”

Indeed, eyewitness accounts of the fuel shortages in the New York City suburbs bear this out. Two days following the storm’s arrival, there was little sign of anything amiss in Northern Westchester County, some 40 miles north of New York City. But by Thursday, November 1st, practically all of the area’s gasoline filling stations had run dry. An influx of drivers from the more adversely-affected hurricane areas clogged local roads in scenes reminiscent of the 1979 oil crisis. The commuter rails had shut down in advance of the storm, therefore more people had to drive to work after Sandy passed through. Moreover, with millions out of power, the use of emergency generators caused an additional, unanticipated spike in gasoline demand. With fears over persistent shortages escalating and outdoor temperatures falling, the propensity to hoard gasoline only intensified.

Meanwhile, millions of gallons of gasoline were sitting in terminals that had been incapacitated by the power outages, not to mention the offline refineries and pipeline terminal outages. Many gasoline stations had ample supplies underground, but without electrical power to run their pumps, the fuel was inaccessible. It was the perfect storm—“Murphy’s Law” ruled the day. Imagine if a similar confluence of events went global?

The key takeaways from our first-hand observations were as follows: the shortages appeared very quickly with absolutely no warning whatsoever—i.e., no one in the public knew the service stations were running dry until after the fact—and this occurred much further away from the disaster zone than anyone would have anticipated—i.e., the regional scramble for whatever fuel that is available can happen in unpredictable patterns.

Another key observation deals with the misinterpretation of “demand destruction.” Last week, we recounted how our contact topped-off his tank one day before Sandy’s landfall. Four days later, the posted price at the same filling station had declined 20 cents a gallon—demand destruction at work! But there was only one problem: there was no gasoline to be had at the lower price—or any price for that matter.

This leaves us pondering the following question: What is the intrinsic value of a gallon of gasoline when future supply is uncertain and one’s fuel tank is nearly empty? Is a gallon worth $5.00? Perhaps $10.00? Perhaps much more? Oil has been called “black gold” for a reason. There are no readily-available substitutes. We can store dried beans to replace the meat in our freezer, and canned vegetables to replace fresh produce, but how do we get to work, or to the store, or to the doctor, or to our loved ones, or run our generators, when there is no gasoline? (We read a story on Bloomberg about one gasoline buyer who paid $20 a gallon to a seller advertising on Craigslist.)

At the time of the Iranian Revolution in 1979, there was widespread hope that electric cars would one day dominate the roads. Now, some 33 years later, our transportation network is still dominated by gasoline-powered vehicles. Hybrid and natural gas vehicles are still too few and far between to make a difference. Electric vehicles would not have helped anyway, because of the power outages. We can talk about these new technologies ad nauseum, but the real truth—uncomfortable as it may seem—is in the chart above.

Matt Simmons used to make light of the intrinsic value of oil with his “cup of gasoline” analogy. Today, the price of Brent crude equates to 16 cents a cup when it is sold to a refinery. To paraphrase Simmons, there is nothing we sell this cheaply “by the cup” anywhere in the world. Mother Nature is talking—is anybody listening?