Oil and the Weight of the World 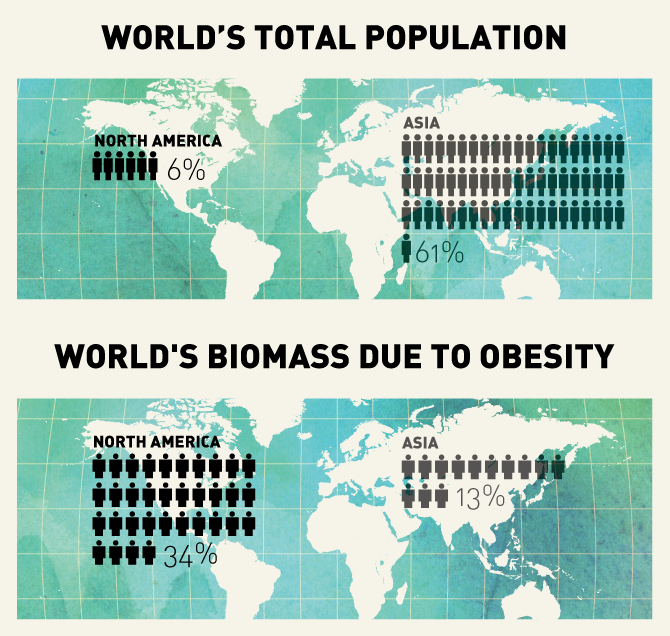 Some poor countries may have booming population growth, but oil rich countries could be exhausting the world’s resources just as fast with our waistlines. New research in the journal BMC Public Health argues that tackling population weight is crucial for food security and ecological sustainability.

Researchers from the London School of Hygiene & Tropical Medicine say that people’s weight – not just population size – should be taken into account when planning how to deal with increasing pressure on the planet’s dwindling resources. Presumably, this is because weight is a good indication of consumption, particularly of richer foods like meat and dairy that require more resources (like petroleum) to obtain.

Using data from the United Nations and World Health Organization, the researchers estimated the weight of the world’s entire adult population to be about 316 million tons. Of that total weight, they then estimated that 17 million tons of it is a result of people being overweight, and an additional 3.9 million tons is due to obesity.

>”When people think about environmental sustainability, they immediately focus on population. Actually, when it comes down to it - it’s not how many mouths there are to feed, it’s how much flesh there is on the planet.”

>”If every country in the world had the same level of fatness that we see in the USA, in weight terms that would be like an extra billion people of world average body mass.”

Professor Roberts is careful to point out that focusing on obesity in individuals or in groups is divisive and unhelpful. “One of the problems with definitions of obesity is that it fosters a ‘them and us’ ideal. Actually, we’re all getting fatter,” he told BBC News.

While poor countries can obviously have leaner populations for all the wrong reasons, the researchers point to Japan as a good example of a prosperous country with a low obesity rate that could serve as a model for other countries.

One of the most fascinating aspects of the study is its coverage of how many oil rich nations have the heaviest populations. When you look at the list of countries with the largest proportion of overweight and obese citizens, it is clear that petroleum may play a role in obesity.

Prof Roberts says that the high number of Middle Eastern countries on the list is due to the impact of the automobile.

>”One of the most important determinants of average body mass index is motor vehicle gas consumption per capita. So, it is no surprise to see many of the Arab countries in the list - people eat but they move very little because they drive everywhere.”

Aside from all of the other profound drawbacks to oil dependence, obesity seems to have an exponential impact – both on our health and our use of dwindling resources. Obesity is a complex issue, caused by a number of factors, but what’s the connection to petroleum? Someone who consumes 4000 calories a day certainly has a larger carbon footprint than someone who consumes 2000 calories a day, particularly if the foods they are eating are shipped long distances, out of season, with an abundance of packaging. Having easy and affordable access to plentiful oil, as the citizens of most of the countries above do, makes it easier to have a larger carbon footprint. With oil, you can ship foods long distances, not do much “work” in the acquisition of food, and the infrastructure is there to drive everywhere you want. Have you ever driven cross-country in the US? It’s almost impossible not to end up going through a drive-though and eating in your car at some point in the voyage. At least here in the US, we have an infrastructure built around cars that lends itself to a continued dependence on oil.

But all is not lost. There’s never been a better time to get healthy and less oil dependent. Get out on your bike, start looking for a fuel efficient vehicle, and eat local! Your waistline, wallet, and the world will thank you.

The weight of nations: an estimation of adult human biomass [BMC Public Health]