For more than half of his life, 17-year-old Alex Scaperotta has been fighting to end unnecessary vehicle idling in his hometown of Wilton, Conn.

As a third grader, Scaperotta became interested in climate change. Wanting to make a difference, he and a friend decided to start a youth organization called Little People Big Changes. It soon became a way that kids could take action within their own community. They started by developing a PowerPoint presentation about global warming and vehicle idling, and with the help of their third grade teacher, they gave presentations to just about every classroom in the school.

Soon parents all over Wilton were hearing their kids’ voices from the back seat bugging them not to idle. “It started spreading around really fast,” says Scaperotta. “My mom said other parents were telling her that their kids wouldn’t leave them alone every time they left their cars running.” 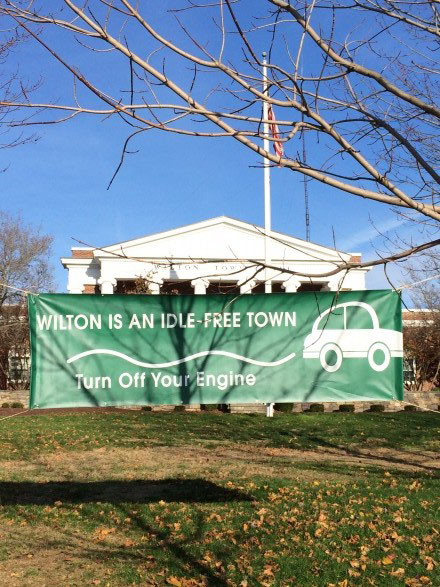 Scaperotta never gave up on his grade-school project. Now a high-schooler, Scaperotta coordinated an effort that convinced the Town of Wilton to adopt a town-wide No Idling Resolution. Proposed by Wilton Go Green, a sustainability group in Wilton of which Scaperotta is a board member, and unanimously supported by the town’s Board of Selectmen, the new resolution reaffirms Wilton’s commitment to the state’s idling law. Although it’s rarely enforced, the law prohibits drivers of vehicles of all kinds from unnecessary idling for more than 3 minutes.

The resolution kicked off a long-term program to raise awareness among town residents about the negative impacts of unnecessary vehicle idling and ultimately train drivers to turn off their engines if idling for more than 10 seconds. Initial efforts include a major signage campaign—150 metal signs have been placed at key idling hot spots around town. Student activities include lessons on idling and climate change, and school pick-up line patrols reminding parents to turn off their cars while waiting for students. In November, Sustainable America helped present a community screening of the documentary Idle Threat: Man on Emissions and provided an online pledge drive where residents could commit to reducing their idling behaviors.

To date, 266 residents have taken the online pledge to idle for no longer than 10 seconds when not in traffic. Phase two of the Wilton idling campaign includes increased signage, expanded educational efforts and work with the town’s vehicle fleet.

Scaparotta even got a persuasive Letter to the Editor published in several local news outlets. Here’s an excerpt:

“In 2050, when scientists believe our planet’s climate will be significantly changed and parts of the globe may become incompatible with human life, I will be 52 years old. Most of the adults I know now will be very old, if they are even still around. Unnecessary idling in the U.S. alone puts 132,000 TONS of additional carbon into the atmosphere each day, contributing significantly to climate change. Your “free choice” affects my future.”

How can you argue with that?

So why did a boy who was years away from driving himself choose idling as the issue to devote his energy to? “You are asking people to think about an impact that they are making on others and the environment every time they stop their car,” says Scaperotta. “Several times a day they have to make an active decision to give up their own convenience by turning it off. By not idling, living more conscientiously becomes more a part of their daily lives.“

Shared e-scooter programs may seem like a green way to get around, but these small vehicles can have big environmental...
Continue Reading