The Bike Superhighways of Denmark

Today, cycling is part of Copenhagen’s culture. Bikes are everywhere! But there was a time when vehicle traffic clogged Denmark’s capital city’s roads. In the 1970s Denmark faced an energy crisis, a recession, and increasing car traffic congestion.[^1] The public demanded better transportation infrastructure and options. A now famous photo from the ’70s depicts a bicycle rally in Copenhagen’s City Hall Square calling for better mobility.

Since then, Copenhagen has done such a great job of building a bike-friendly infrastructure that it has inspired a new term: Copenhagenization. Cities all over the world look to Copenhagen as a model when they try to increase usage of this cheap, CO2-friendly means of transportation. Copenhagen’s public cycling strategies have been so successful that the city is now facing bicycle congestion problems.

Enter the country’s new Cycle Super Highway, the first of a network of 26 routes planned to connect commuting suburbanites to the city. Also known as the “bike-bahn,” the superhighway is “a bike lane that gives cyclists a safe, smooth ride and eliminates as many stops as possible…connecting downtown Copenhagen with the town of Albertslund, 22km outside the city,” according to the City of Copenhagen.

The route includes amenities like air pumps, safer intersections, and every bike commuter’s dream: traffic lights timed to average cycling speed, which minimize the number of stops so riders can cruise right into the city. The superhighway is intended to encourage more commuters to travel by bike, even if their commutes are longer than 10 km.

The City of Copenhagen conducts biannual surveys about cycling, and the 2010 survey provided some dazzling statistics we have incorporated into the graphic below. 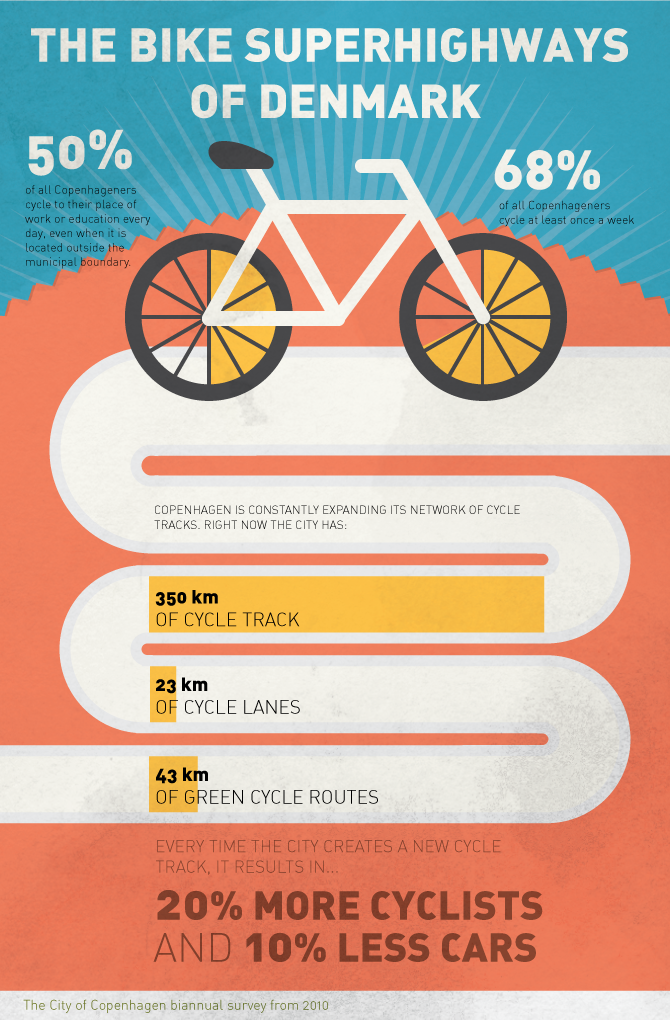 One of the most interesting results from the survey revealed why people choose to cycle in Copenhagen. While a good percentage of residents say they bike because it’s a good way to start the day, it’s cheap, it’s healthy, etc., most respondents said they cycle because it’s more convenient and it’s faster. Now that sounds like something people around the world could appreciate!

Shared e-scooter programs may seem like a green way to get around, but these small vehicles can have big environmental...
Continue Reading
Transportation

The city of Cambridge is aiming to become the first in Massachusetts — and perhaps the country — to require...
Continue Reading