At Sustainable America we found this article from Ned Davis Research important to share. As the authors John LaForge and Warren Pies illuminate, there is a perfect storm brewing in Saudi Arabia which could likely drive oil prices higher than we may have imagined in the near future. This reality highlights the stated mission of Sustainable America - to address the current insecurity of our food and fuel systems in America, both of which are overdependent upon fossil fuels. Becoming more aware of the current and coming issues in this arena is the first step towards taking personal action to shift the tide towards more sustainable food and fuel systems in our country.

The following article is republished by courtesy and permission of Ned Davis Research.

Traveling to Riyadh, Saudi Arabia recently, I was swept into a sandstorm - literally. For the first time in my flying life, I was on a plane that was bouncing up and down, and twisting side-to-side. No fun.

While there, I was briefed on a different Saudi storm brewing - one in which the entire world will soon be engulfed, and will assuredly be no fun. If you are even remotely interested in the future of oil prices, you’ll be concerned with what we learned.

Our story needs a little context to start. Saudi Arabia has been the consistent oil supplier in a world full of inconsistency. In the last 20 years, the Kingdom has regularly made up 11% to 13% of world oil production (chart, black line), even with world production growing from 65mmbl/day to 87mmbl/day (chart, blue bars). The West has come to rely on the Kingdom for its ability to produce at-will, should global oil supplies be threatened. For this reason, Saudi Arabia is widely known as the world’s swing producer. The West, however, should prepare to find its extra oil elsewhere. 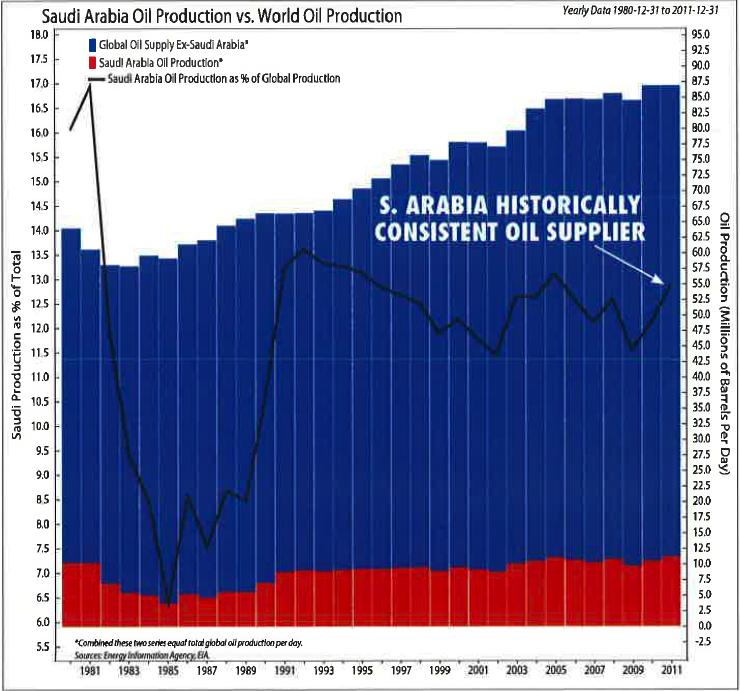 We are not talking about peak oil. This publication is not a rehash of Matt Simmons’ seminal work, Twilight in the Desert (if you haven’t read it - it is a must, up there with Yergin’s The Prize) The Saudis are still producing lots of oil and peak production is not here just yet.

And we are not talking about poor Saudi relations with the West. As far as we can tell, the relationship remains strong, particularly with the U.S. During our visit, our hosts were exceedingly gracious, and we have only good things to say (aside from the sandstorm, that is).

Today’s storm is Saudi oil consumption, which has turned into a Category 4 hurricane. The Kingdom is consuming massive amounts of its own product. This not only means less oil for the rest of the world, but the world will likely be sourcing from less stable countries. And based on what we found, it could get worse before it gets better.

Saudi Arabia has quickly become the 5th largest consumer of oil in the world at 2.9mmbl/day. The Kingdom now absorbs more oil in a day than Canada, Brazil, Russia, and even Germany.

For the world’s 20th largest economy, this is quite a feat. 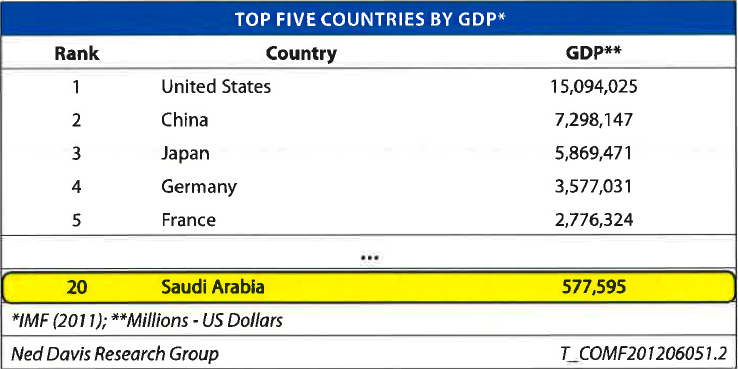 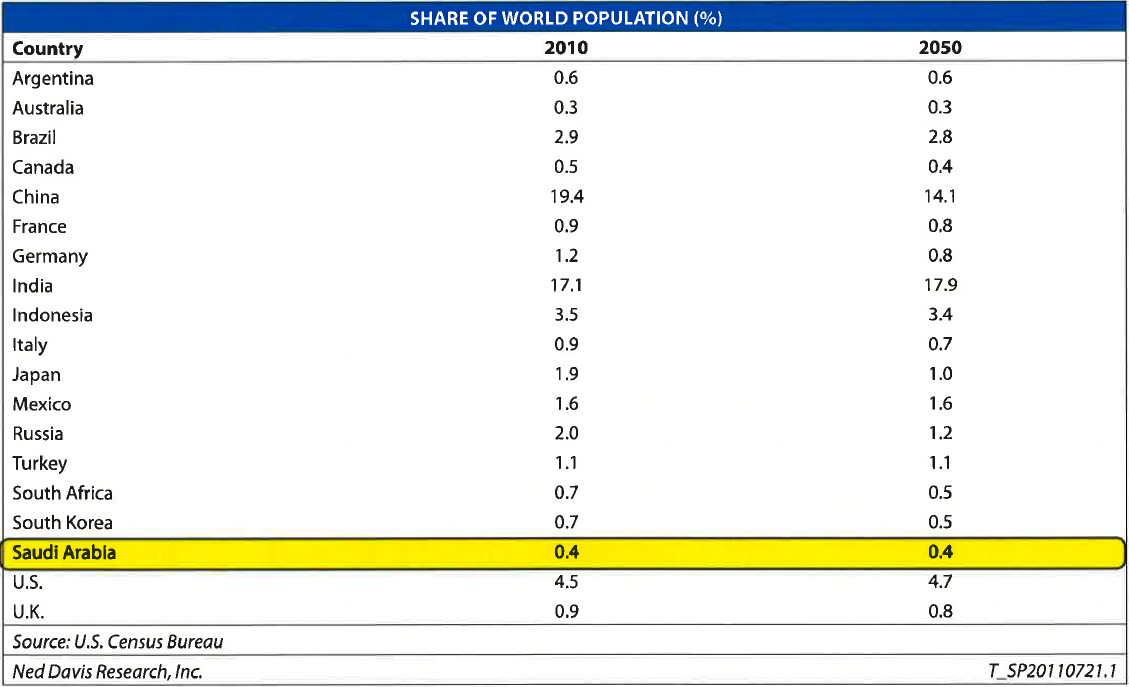 What this amounts to is that Saudi Arabia has become very inefficient in its oil use (chart below). The average Saudi consumes 41 barrels of oil per year (blue line) - twice that of the average American (red line), 17 times the average Chinese, and 38 times the average Indian (black dashed line). 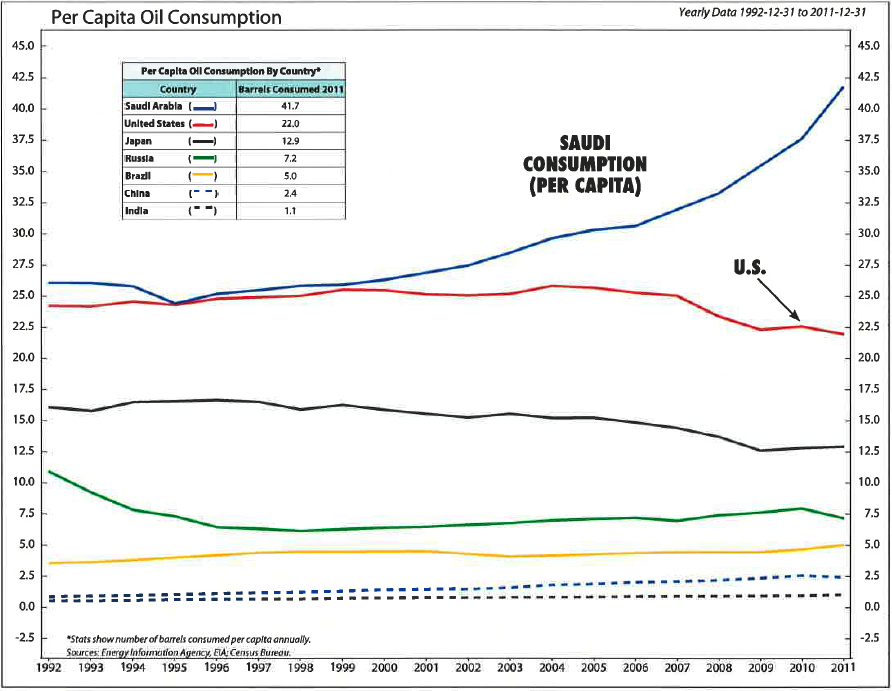 The main problem is that the government heavily subsidizes oil. The average gasoline price, around $0.50/gallon, is a fraction of the rest of world. Paul Gamble, Head of Research at Jadwa Investment in Saudi Arabia, and a fellow co-panelist in Riyadh, uncovered oil being sold to Saudi power and cement companies between $2.70 and $4.30 per barrel! 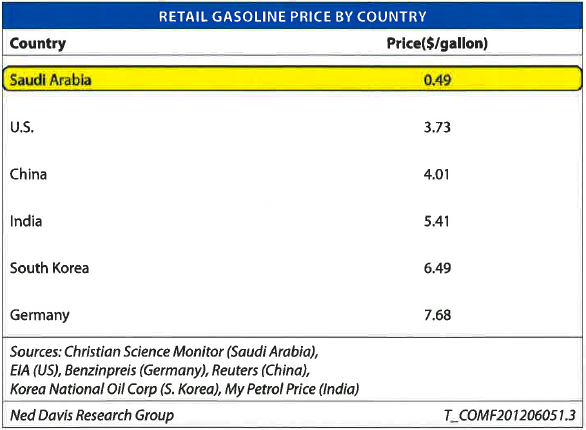 So why not switch to other fuels or stop subsidizing?
The Kingdom does have a future fuel plan, but it has yet to kick-in, and it is super aggressive. 100% of energy use today comes from fossil fuels, which the government would like to drop to 57% by 2030 and to 15% by 2050. In May, the government did announce plans for 16 nuclear reactors by 2030 so the plan is proceeding, but a real solution is years away.

Stopping subsidies is a far more complicated issue, and one that looks like a non-starter in 2012. Saudi Arabia has an outsized youth problem on its hands. Nearly 50% of all Saudis are under the age of 25. In the chart below, you can see that Saudi Arabia is sandwiched between Egypt and Iran as those countries facing imminent youth bulges. 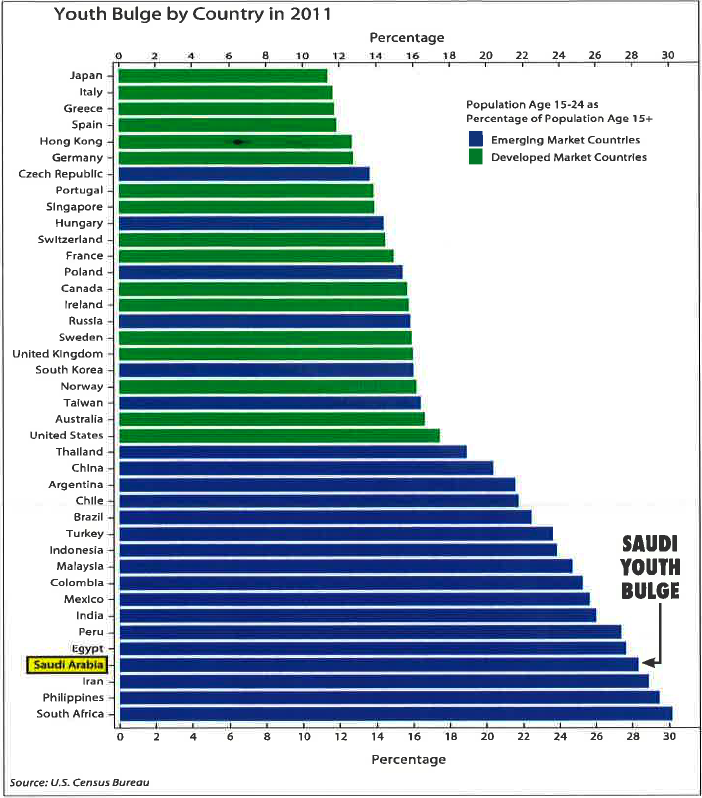 Youth bulges, combined with high unemployement (plus increasing educational rates, and low and rising incomes), have a history of stirring-up trouble. Past revolutions were bred from similar circumstances. Some notables include Iran in the late 1970’s, South Korea is the mid-1980’s, Indonesia in the late 1990’s, and Tunisia and Egypt in 2010. To be clear - we are not saying that revolution is at-hand in the Kingdom, just that demographic trends are putting the government in a difficult spot.

The ideal antidote for Saudi Arabia is to create jobs, especially high-paying ones. Unfortunately for the Kingdom, 85% of revenue is oil-related, and the oil industry does not require loads of bodies. Most petro-chemical companies, as an example, get by with hundreds of people, not thousands. 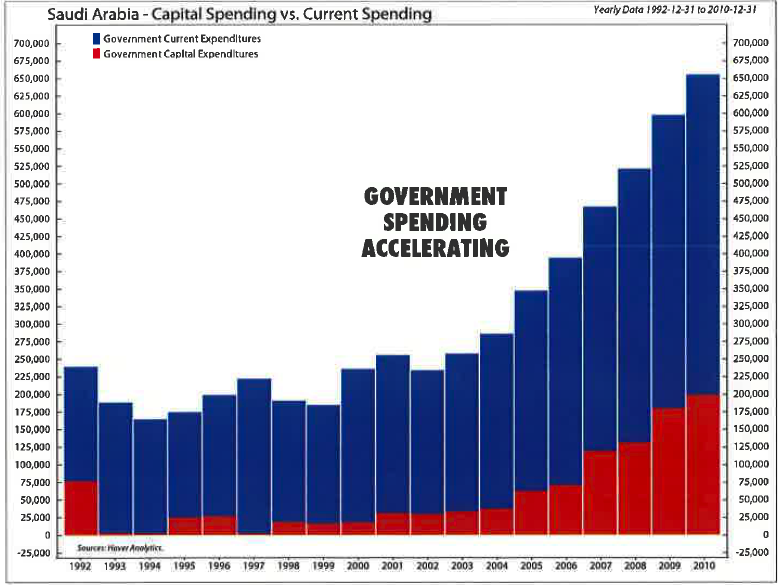 Is the population problem getting worse or better? The Kingdom’s population is set to increase by more than 50% in the next 40 years (chart below), so worse. 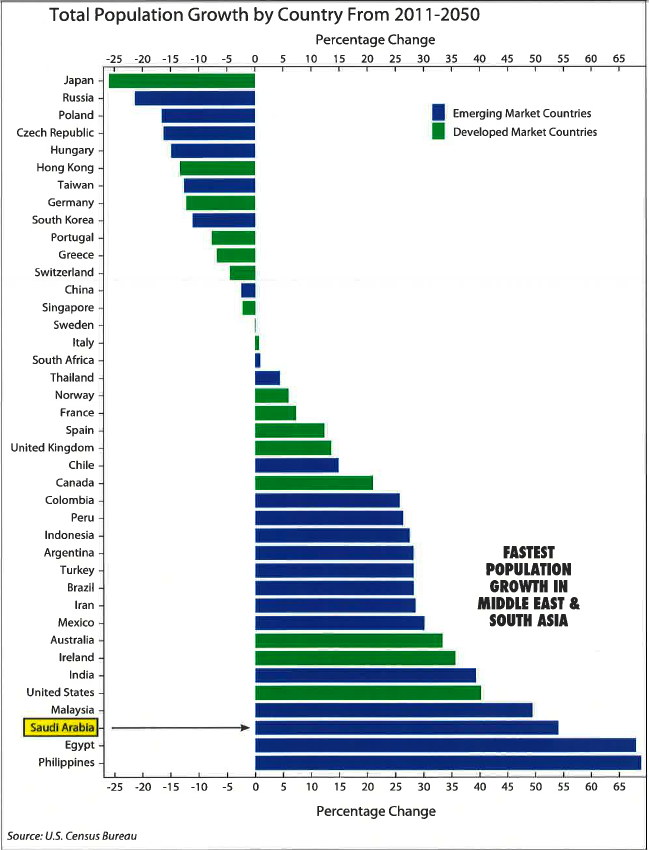 To maintain spending, the Kingdom will need a certain oil price. What is the “breakeven” oil price that balances revenues with spending? On an oil panel in Riyadh, Paul Gamble presented his estimates, which fell between $70 and $90/barrel in the coming years. Paul’s estimates are represented by the blue lines in the chart below. He also threw out, to an astonished audience, that the breakeven price could be as high as $325/barrel by 2030. The $325/barrel number was even more startling when we realized that slower Saudi oil consumption growth was factored in the future. 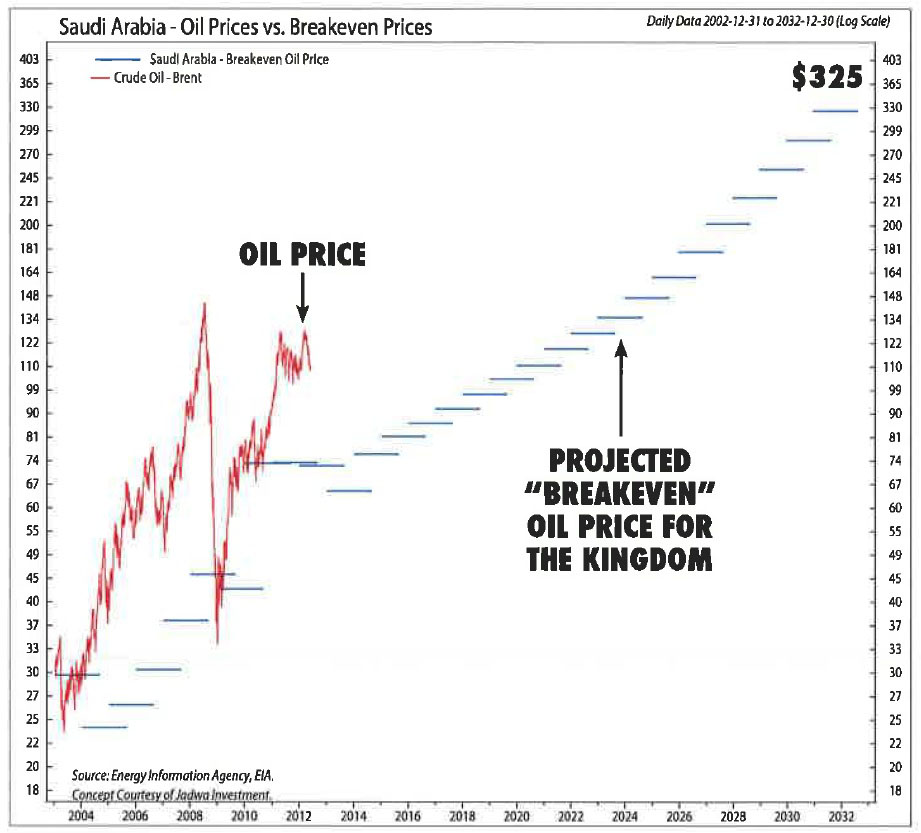 While we don’t have our own forecast, we were intrigued by Paul’s approach. In particular, we liked how his analysis incorporated the Saudi government’s penchant to overspend. As the chart below indicates, actual spending (blue bars) has exceeded budgeted spending (black bars) by an average of 22 percent over the past decade. 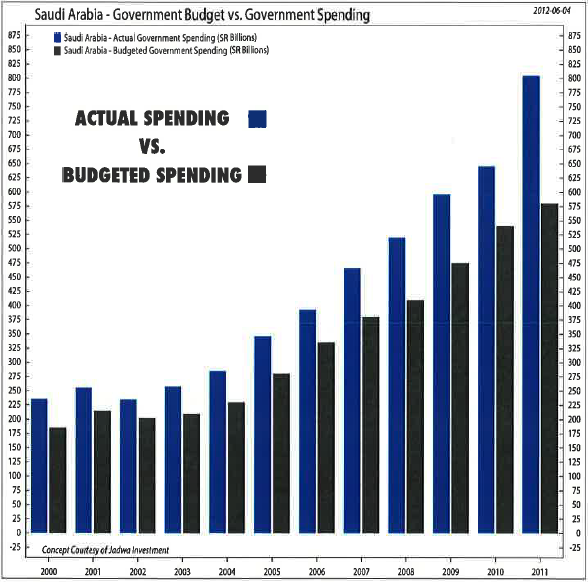 This publication really boils down to one point - Saudi oil available to the West is less than what it seems. Saudi oil production, at 11.1mmbls/day, is 2mmbl/day higher than it was in 1995 (blue bars). But when factoring in Saudi oil consumption, available supply to the outside world is actually flat (red bars)! 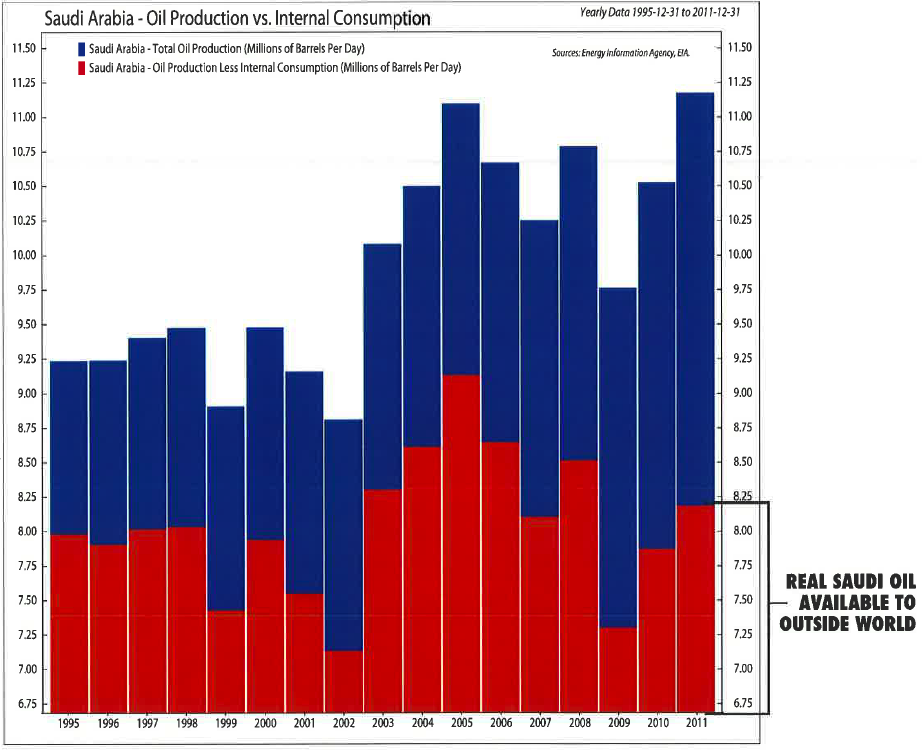 Saudi Arabia is consuming massive amounts of its own oil. The Kingdom is now the 5th largest oil consumer in the world, larger than Canada, Russia, Brazil and even Germany. As it consumes more, less is available for the rest of the world, and the world will be sourced by less stable countries. The Saudi government may be powerless to stop runaway internal consumption anytime soon, as regional youth bulges keep the threat of another Arab Spring alive.