Matt Absatz owns and operates a cattle ranch in the remote glacial valley of Bella Coola, British Columbia, Canada, where he raises Red Angus beef. He distributes beef in Southern California under the “Bella Coola Beef” label. The cattle are raised under strict organic principles and are 100% grass fed from birth to finish. Somewhere between his own birth and finish, Matt graduated from Johns Hopkins University with a degree in Biology and subsequently designed tests for milk, meat and other agricultural products at a biotech company. When he’s not on the ranch, he spends time with his family in the San Diego area on a small farm, where he raises chickens, fruits, vegetables and horses.

Comedian Sam Kinison once proposed a simple and humorous (albeit impractical and callous) solution to world hunger - move starving people to arable land. “You live in a desert!!” he screamed. “Nothing grows here!! Nothing’s gonna grow here!! We have deserts in America; we just don’t live in them!!”

Of course, his last point is inaccurate, as 22 million people live in the desert that is Southern California – notwithstanding the mirage created by importing massive quantities of water. This has created an extremely challenging environment for those of us who wish to both eat locally-sourced food and find more sustainable ways of bringing food to people. I’d like to discuss one possible solution to this multi-faceted problem - raising cattle in an area with sustainable resources and then using efficient means of shipment to deliver it to our desert region.

Ten years ago, my family and I embarked upon a quest to become more self-sustaining while continuing to live in the San Diego area. We started by planting a small garden and vineyard and by raising chickens. Next, we brought in horses for manure to fertilize the gardens. Then we turned our thoughts to milk and meat.

However, with horses and gardens already dependent on resources lacking in Southern California (i.e., grass, water, and nutrient-rich soil), a sustainable local solution for raising a healthy protein source, seemed highly unlikely. So we decided to purchase a cattle ranch in coastal British Columbia, where the abundant glacial water and rich alluvial soils can sustainably provide the quantity of biomass necessary to raise grass-fed beef cattle.

While I was considering this decision, I found myself fascinated - from both a mathematical and public policy standpoint - by the question of whether it is more efficient to raise cattle locally in our resource-challenged region or to ship it in from a remote but resource-rich area using the most efficient “less than load” or “back haul” trucking methods.

For those not acquainted with the shipping and logistics industry, almost every container that traverses the roads has some extra space available at the last minute. When the container is heading to its intended destination, that space is called “less than load.” When the container is coming back from dropping freight, it is empty. That available space is known as “back haul.”

Both of these categories of freight are less expensive than usual so they offer farmers great, inexpensive trucking options. And the trucks are already moving freight along those routes so there is a minimal addition of fuel needed to carry the additional freight.

In Southern California, to raise a steer, it is necessary to truck in hay from the outside. One “local” ranch known for raising grass-fed beef, moves the animals back and forth to Northern California at key times during the year, as well as trucking in outside hay. This practice uses even more fuel as more weight is shipped over long distances, multiple times.

If a steer is born in Southern California in April 2012, he and his mother together will consume an average of 40 lbs. of hay per day until November 2012. This steer will then likely be weaned and maybe eat grass until April. Assuming there is no grass from April to November, then that same steer will have to be fed hay again from April 2013 until November 2013 now he will consume 30 lbs. per day by himself.

In working through the calculations, I realized that there are a lot of variables, which is probably why this kind of holistic analysis is not often done. But after accounting for as many of the variables as possible, I concluded that in sum, a Bella Coola Beef Steer requires 2.9 to 5.5 gallons of fuel to raise to finish, versus a typical Southern California Steer, which requires 27.2 gallons of fuel per steer. That’s a significant difference. 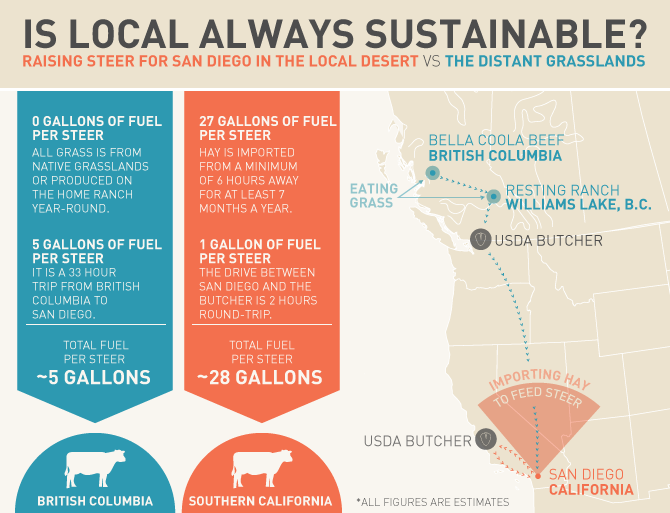 There are still the additional efficiencies of getting the beef from the USDA butcher to consumers in Southern California. This is easily solved by using Less Than Load and Back Haul trucking down Interstate 5. We maximize the capacity of commercial carriers who are heading down to Southern California anyway.

Sam Kinison seems like an unlikely expert on sustainable agriculture, but these calculations (while admittedly dry) prove his point - it simply does not make sense to try to grow certain kinds of food in the desert.

Here are some of my more detailed calculations on how much fuel would be required to raise a steer in Southern California versus raising a steer 1,800 miles away in British Columbia:

British Columbia Steer - We raise all our steers in Bella Coola, B.C. on native grasses grown on our ranch or on government grazing lands. Therefore, there is no need to truck in outside hay. We simply choose to ship the live animal to the butcher, rather than the food to the live animal.

To reduce stress on the cattle, we also haul steers from our “resting ranch” halfway in Williams Lake, B.C. to Lynden, WA. This consumes 145.29 gallons or 2.9 gallons per steer.

Overall, our fuel usage to raise a steer amounts to about 4 to 5 gallons per steer.

A semi-truck can carry a load of 30 tons of hay, which will only finish 3.5 steers. The closest hay fields average around 6 hours away. Many of the local horses are fed with hay that is trucked in from 6 hours away.

The local cattle ranch that ships their cattle to Northern California found it to be cheaper than trucking in hay but they are creating an even larger carbon footprint.