What is Food Insecurity,

The World Food Summit of 1996 defined food security as existing “when all people at all times have access to sufficient, safe, nutritious food to maintain a healthy and active life”. Food insecurity certainly isn’t a new thing, since the dawn of humanity there have been those who don’t know where their next meal is coming from. That insecurity can range in severity from occasional meal uncertainty to full blown famine. One factor in the IPC Acute Food Insecurity Reference Table that determines the breaking point between Phase 1 mild food security and Phase 2 stressed food insecurity is the likelihood that someone suffering from food insecurity might break the law in order to eat or provide food for one’s family.

According to the World Health Organization, food security is built on three pillars:

With plenty of food on grocery store shelves in the United States, it’s not surprising that food access and poverty are the issues deeply affecting food insecurity in America. A USDA study indicated that in 2010, 17.2 million households in America had difficulty providing enough food due to a lack of resources. Among the Americans suffering from food insecurity are hardworking people who simply don’t always make enough to feed their family, children and seniors. With rising food prices, food insecurity in the US isn’t going away. 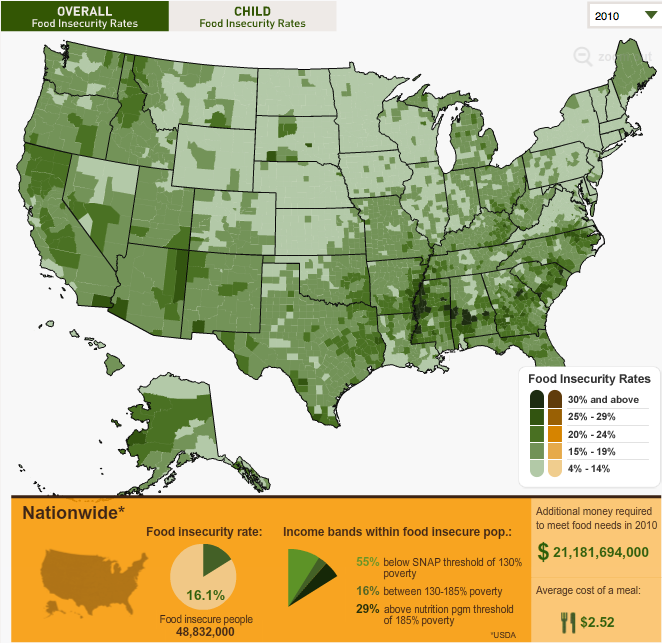 Why does it matter?

The fact remains that 16 million children in the United States lived in food insecure households in 2010, according to the USDA. Hunger isn’t just a matter of discomfort. Good nutrition, particularly in the first three years of life, is important in establishing and maintaining a good foundation that has implications on a child’s future physical and mental health, academic achievement, and economic productivity.

There are public assistance programs and food banks available to help Americans who are currently food insecure, but in a country where nearly 15% of the U.S. population relied on food stamps last year, one might question the sustainability of such a practice. Addressing food waste may be one solution. A 1997 study by the Department of Agriculture figured that about 10 million people a year could be fed through the recovery of just one-fifth of food waste. Check out our post on the topic to learn some ways to cut back on your own food waste.

It is important to address food insecurity in our country now to make sure that the next generation of Americans have the resources they need to be the best they can be.