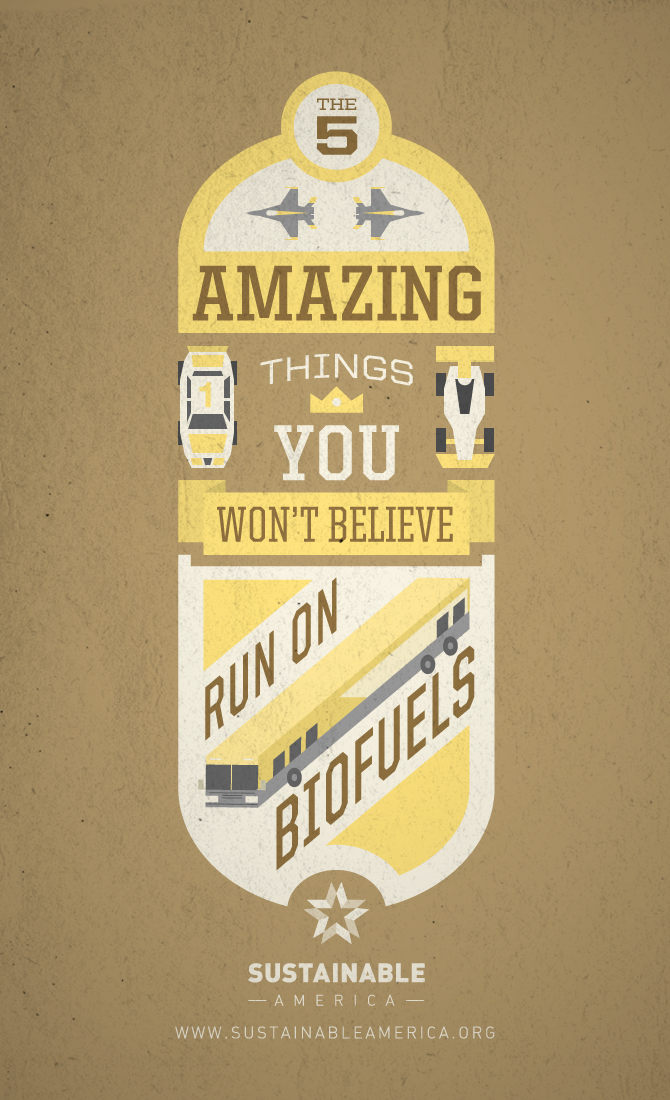 Some people associate biofuels (fuels derived directly from renewable biological resources) with long hair and environmentalism, and that’s fine! In fact, you’ll see Mr. Willie Nelson featured prominently on our list. But with innovations in renewable fuels made every day, biofuel is popping up in some unexpected, exciting, and high-performance places. Here is our list of a few of the most remarkable.

NASCAR has run on E15 ethanol-based biofuel since 2010 when it began running practice and qualifying laps with the green fuel. No significant modifications were made to the cars in order to run on E15, and the low-carbon fuel emits 20% less greenhouse emissions than unleaded gasoline. NASCAR claims to have seen improvements in performance, with a 5 to 10 percent increase in horsepower depending on the race and the conditions.
<div class="caption" id="attachment_4444" align="alignnone" width="640"><img src=”/uploads/2012/09/Nascar.com/photos/familymwr/5462904713/sizes/l/in/photostream/)</div>

The train that Queen Elizabeth II, Duke of Edinburgh, and the Prince of Wales use on long journeys around the United Kingdom has run on biodiesel derived from used cooking oil since 2007. The train is capable of speeds up to 125mph, but restricted to 100mph when on royal duty.
<div class="caption" id="attachment_4390" align="alignleft" width="640"><img src=”/uploads/2012/09/royaltrain.com/photos/mjonesrailphotos/7652525794/sizes/c/in/photostream/)</div>

While not every Blue Angels air show is run on biofuel, The Blue Angels wowed crowds at the Naval Air Station Patuxent River Air Expo in Maryland last year powered by a 50/50-blend of jet fuel and camelina-based biofuel. Camelina is a drought resistant crop that can be used as a rotation crop for wheat. Sustainable Oils, the company providing the fuel to the military, says camelina-based biojet fuel reduces CO2 emissions by 75% over traditional petroleum-based jet fuel. By 2016, the Navy plans to deploy the Great Green Fleet, an aircraft carrier strike group powered entirely by non-fossil fuels.

The Blue Angels In Action

In 2010, Scuderia Ferrari, the racing team division of the Ferrari automobile marque, began using a blend of biogasoline and next-generation ethanol sourced from straw. Virent, the Wisconsin company that produces the biogasoline portion of the blend, says its energy content is the same as or better than premium gasoline and can be blended seamlessly into conventional gasoline. Virent also says the sugars can be sourced from non-food sources such as corn stover, wheat straw and sugarcane residue, as well as conventional biofuel feedstocks like sugar beet, corn, wheat or sugarcane. A Formula One racecar running on biofuel is not just a good gesture toward the environment. Like NASCAR, Formula One teams are focused on winning, and a nod to biofuels from this group is a nod to the performance potential of biofuel.

Willie Nelson has been a supporter of biofuels since 2004 when his wife bought a diesel Volkswagon that ran on vegetable oil. He was so impressed with the performance of the fuel that he got a Mercedes diesel right away. Willie even has his own biofuel, BioWillie, named in his honor. As the video below shows, Willie Nelson’s tour bus is fueled by local biofuel wherever he goes with the help of the Sustainable Biodiesel Alliance, a nonprofit group cofounded by his wife Annie Nelson.

The biofuels referenced in the list above are made from a wide variety of raw materials, otherwise known as “feedstocks.” Some forms of biofuel, like Green Crude and waste grease biodiesel, are considered “drop-in” biofuels. In other words, they can be used as a direct replacement for fossil fuels in a machine’s existing engine. Other forms of biofuel, like ethanol, are considered ‘alternative’ fuels. They do not replicate the chemical properties of fossil fuels and therefore require blending with conventional fuels like gasoline in order to be used by a typical combustion engine.

Biofuels are domestically produced, renewable sources of energy that burn cleaner than fossil fuels. The playing field for emerging advanced biofuels is wide, and there are a lot of competing technologies and methods. It remains to be seen what the future holds for these individual forms of biofuel in the U.S., but it seems clear that biofuels in general hold much promise as a fuel source that could eventually ease our nation’s dependence on oil.