There’s a lot of talk about zero emissions from our cars, running our homes off renewable energy, even using our own bodies to create energy when we workout! But what about our flights? Without a renewable jet fuel, the airline industry is going to have a very hard time keeping the cost of flying low enough for the average consumer to take a summer holiday. Delta airlines recently invested in their own oil refinery in an attempt to control fuel costs. 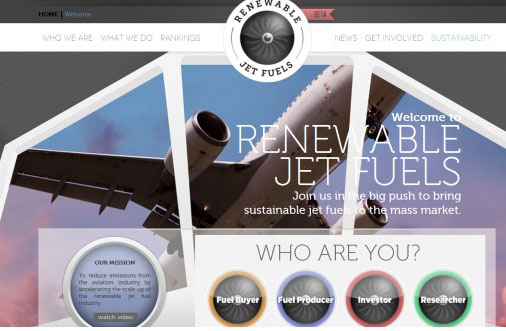 So what’s happening in the world of renewable jet fuels? A group called the Carbon War Room has taken up the mission to “significantly reduce greenhouse gas emissions from the aviation industry by accelerating the scale-up of a sustainable renewable jet fuel industry.” They are currently trying to raise awareness about the renewable jet fuels industry and to increase transparency among fuel purchasers to push the whole industry towards more sustainable standards of operation.

According to the Carbon War Room, there are currently 5 types of renewable jet fuels, all of which are able to be directly substituted for conventional petroleum products.

HEFA (or HRJ), Produced from Hydroprocessing Natural Oils - is made from plant oils or animals fats. It is possible to integrate the production process of this fuel into existing fuel refining facilities.

FT-SPK, Produced from Biomass Gasification and Fischer-Tröpsch Synthesis - this fuel is made from biomass and uses a gasifying (vaporizing) process to turn vapors into liquid fuel.

ATJ (Alcohol to Jet), Produced from Alcohol Oligomerization - this process links short-chain alcohol molecules together to form jet-fuel range hydrocarbons. The economic viability of this process is usually evaluated on a case by case basis as large volumes of alcohol have to be reduced down to make the jet-fuel.

PTJ (Pyrolysis to Jet), Produced from Biomass Pyrolysis - with this process, biomass decomposes to low-quality pyrolysis oil which must then be upgraded to create a jet-fuel.

FRJ (Fermented Renewable Jet), or Fermentation-Based Biomass-to-Liquid Synthesis - in this process sugars are fermented using microorganisms which directly metabolize the sugars into a hydrocarbon fuel that needs little or no additional processing. Some of the sugar sources being used include yeast, algae and bacteria.

The US Military is already using some of these innovative processes and fuels in their airplanes. Rentech corporation is a clean energy producer that has developed a process using the Fischer-Tröpsch Synthesis to create ultra clean jet fuels. They see a huge market in providing fuels to the military. The United States Air Force is already using a 50% blend of synthetic fuels in their aircraft with a goal of 50% of the USAF fuel purchases to be composed of domestic synthetic fuel blends by 2016.

When the commercial airline industry joins the renewable bandwagon, you may be able to take that around the world trip of your dreams with a lot less guilt about your carbon footprint.