Why Are Food Prices Rising? 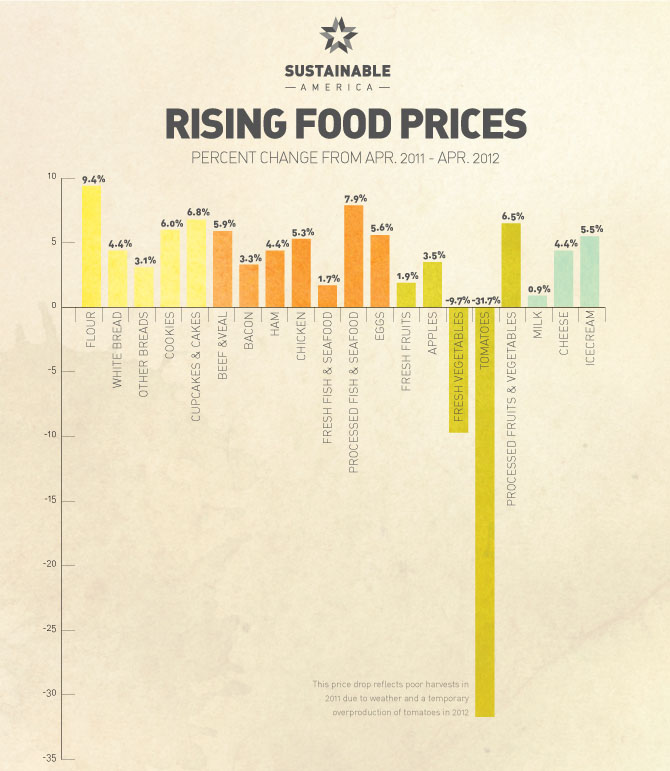 The US Bureau of Labor Statistics released the April 2012 Consumer Price Index (CPI) on May 15, and the numbers on food prices have continued their upward trend as expected. The food at home index (grocery store prices) increased 3.3% since April of 2011, while general food prices were similar - up 3.1% overall.

This isn’t normal inflation, so what is causing the steady uptick in food prices?

Food prices are really a global issue. Countries less dependent on food imports like the US are less affected by global volatility in food prices, but we are not left unscathed. Factors that affect food prices include oil prices, weather, small yields, higher demand, and crops diverted to biofuels.

Much of our food is shipped long distances using a system completely dependent on oil. When the price of oil goes up, typically the price of food goes up too. Food producers and retailers try to absorb as much of that cost as possible until they have to pass it along to consumers.

Unusual weather patterns attributed to climate change have affected harvests worldwide, often producing smaller yields, and sometimes decimating an entire crop. Have you tried to buy a pine nut recently? The price has skyrocketed in the past few years due to a poor crop and increased demand in China, which led them to cut their exports. This story on pine nuts from the Chicago Tribune is a good example of how a few of these factors can dramatically change the price of a given food.

For another good example closer to home, notice the price of vegetables and tomatoes specifically in the graph above. It’s good the price of something is dropping, right? Not so fast. The price drop does reflect a strong supply of fresh market vegetables this year, but it also reflects poor harvests in 2011 due to severe spring freezes that raised the price of tomatoes almost 50% last year. Usually Mexico’s fresh vegetable crop makes up for US freeze damage, but in 2011 the freezing weather went far enough south to affect Mexican crops as well. In addition, there was a temporary, and controversial, overproduction of tomatoes in 2012 that drove prices even lower.

The growth of the economies of countries like China and India have meant a greater demand for certain foods like meat and high quality grains. This increase in demand drives prices for these items, among others, higher.

While biofuels are an important alternative fuel source that could help us decrease our dependence on oil, in recent years large portions of the domestic corn crop has been diverted to biofuel production. The same is true in places like China and India. This means less corn to feed cows, less corn to make into food products, and of course higher demand for corn, which leads to higher prices.

It’s clear that food prices are affected by a complex web of factors from weather to politics to human taste. As the world we live in changes, we will have to be flexible and innovative to keep up with the rising price of food.