“Excuse me for bothering you… but are you aware that it’s against the law to idle your car engine in NYC for more than 3 minutes?”

Those are the words George Pakenham, a New Yorker who works in finance, has used to start thousands of discussions though car windows on the streets of Manhattan. What started as an impulsive act on his Upper East Side block in 2005 evolved into a one-man citizen activism campaign that went all the way to City Hall and is still going strong.

Annoyed by drivers who pollute the air and waste gas idling their vehicles, George decided to take matters into his own hands by directly, but politely, asking them to stop. Once he learned there was actually a law against idling in New York that wasn’t being enforced, he started keeping records about his encounters. His efforts eventually led Mayor Michael Bloomberg to pass stronger idling laws and garnered international press attention. Pakenham has documented his inspiring story, with all its ups and downs, in the award-winning film Idle Threat: Man on Emission, which has been featured at several film festivals and will be aired on Link TV on Tuesday, September 23, at 8PM ET/PT.

As you may know, Sustainable America is also passionate about the idling issue. Thousands of supporters have signed a pledge to stop unnecessary idling through our I Turn It Off campaign. When we heard about George’s efforts to raise awareness about this wasteful habit that threatens our environmental and personal health, we decided to team up with him to bring his film to a wider audience.

You’ll hear more about our joint efforts in the coming months, but we caught up with George to learn more about his film and the story behind it. (Scroll down to watch the trailer for Idle Threat: Man on Emission.)

Sustainable America: What led you to take such a personal interest in the issue of vehicle idling?
George Pakenham: I had been living in New York for almost 30 years. It’s my home, and I love New York — and I expect a lot of my fellow citizens. Around 2005, I started to notice that people were habitually idling at curbside, stinking up the air, and wasting fuel, and it began to rub me the wrong way.

It became apparent to me because I was already annoyed about two central themes. My brother had just been diagnosed with stage IV lung cancer and he wasn’t a smoker, which was a baffling thing to cope with. At the same time, it became apparent that the invasion in Iraq was a political move for oil rather than weapons of mass destruction, and that really got to me. Watching my fellow citizens behave in this aberrant manner kept bothering me and didn’t go away.

Why did you approach the first driver?
GP: One night after an evening out with my friends, I was coming home and I saw the driver of a big stretch limo idling. All of his passengers were at a restaurant inside having dinner. Something snapped, and I looked in and started talking to him in a civil manner. I asked him about why he was keeping the engine on and talked about what it meant and how it was toxic and such. Then I asked him to shut his engine off — and he did! That was a big catharsis for me. It hit me like a ton of bricks that I could modify this man’s behavior — a total stranger! — about something I knew very little about but I knew was bad.

That was the start, and I kept on doing it as I would go from my apartment to the subway then to work on Wall Street. It was much easier than I thought. I did some research and found out that $20 billion a year is wasted by the American public idling at curbside, according to the Department of Energy. It was just mind-blowing to me.

»>TAKE OUR PLEDGE TO STOP IDLING AT ITURNITOFF.COM«<

Why did you start keeping records of your encounters with idlers?
GP: I soon found out that there were laws against idling in New York, but they weren’t being enforced. New York City traffic agents didn’t even have the authority to write tickets for idling. I wanted to change that. Getting people to turn off their engines was so easy for me and I was so successful that I decided to keep records on a spreadsheet. I wanted to be certain of my findings so I could ultimately present them to government officials and nonprofit organizations. I would keep records of the location and sex of the individual, the age and race, where it took place, whether or not they knew the law or not, and whether the turned off their vehicle.

Initially, 80% of the people shut their engines off, but only 25% knew about the law. After five years, I was still about 80% successful, but those that knew the law and idled anyway were up to about 70%. That’s a stunning statistic.

At what point did you decide to make a film about it?
GP: I couldn’t believe I was 80% successful at getting people to turn off their engines. An 80% success rate is better than any NFL quarterback, any baseball player and any NBA player that’s ever played basketball. I was sitting on a terrific story. In the 1980s I worked in television and learned how to produce a television show, so I had it in my blood. So in January 2007 I shot a 13-minute documentary.

Within six or seven months I had a demo of the documentary with all the stats I’d collected on the street. I started going to City Hall, the Department of Environmental Protection and the Department of Transportation, and no one gave a damn. I finally went to the Environmental Defense Fund, and after three months of postponed appointments I sat with the head of public health and the head of the legal counsel and they were just floored. They said this is great research, a great video, great statistics. They wanted to work with me to make something happen. That was a landmark day.

What did the Environmental Defense Fund help you accomplish?
GP: Thanks to their help, a bill was formulated in City Council to have all 2,700 traffic control agents start writing tickets. In February 2009, Mayor Bloomberg signed into law three different bills that bolstered this activity, but it was just lip service. It was just a PR event; it wasn’t meaningful. Soon after that, a reporter from The New Yorker magazine learned about what I was doing, and he wrote a story about it. Then all hell broke loose and the BBC came in, NPR came in and all these other media sources all over the world. It was crazy!

Is the law being enforced in New York City currently?
GP: The whole effort in the film is to force the 2,700 traffic agents on this because they weren’t allowed to write tickets before 2009. Now they can. The Environmental Defense Fund projected that fines from idling tickets would generate $4.6 billion, but in 2010 they wrote 2,800, in 2011 they wrote 2,300, and in 2012 they wrote only 1,700. It just shows utter failure and that there’s still a lot of work to be done on this issue. Consider this: In 2012 New York City had 400 deaths due to homicides and 3,000 deaths from air pollution, according to the Department of Health.

How did you develop your approach to asking drivers to turn off their engines? What’s your strategy so they don’t roll their windows up on you?
GP: By trial and error I learned what to avoid. If I see a car idling and the windows are tinted black and there’s loud music coming from it, I don’t approach it. If there’s a guy in the driver’s seat and a woman in the passenger seat, I don’t approach them because this animalistic behavior pops out of the male, and he puffs of his chest like a lion. Nevertheless, I’ve done this over 2,900 times in five years, and quite frankly it was so easy and so predictable that when I’d have success it was boring. I liked it when they gave me resistance because then I had to go into a different gear and persuade them to turn their engines off. It was almost a little bit like a sport to me. When that button was pushed I was ready.

Did you get more resistance on really hot or cold days or really cold days?
GP: I did this over five years and I would get about 50 encounters per month. It didn’t matter if it was April when the average was 55° or 60° or if it was December when the average was 35° or August when it was 85°, the statistics were amazingly similar each month. It’s hard to believe but it’s true.

How do audiences react to your film?
GP: My film is the awareness mechanism that has the potential to bring this issue to a very broad spectrum of the United States. I’ve seen the reaction from too many people in film screenings — they leave well-entertained and well-informed. I’ve had plenty of people walk up to me after watching the film and say I will never idle my car again. There are groups all over Canada and the United States that are trying ways to pass laws and create civic involvement.

You’ve done all this and kept your day job?
GP: Yes, I haven’t given up my day job. The motto of this film is that one stupid idiot guy on the Upper West Side of Manhattan who got annoyed about something did something, made something happen, and the world will hopefully be a little better for it. I tell people, “Don’t just let the other guy do it. You do it!” 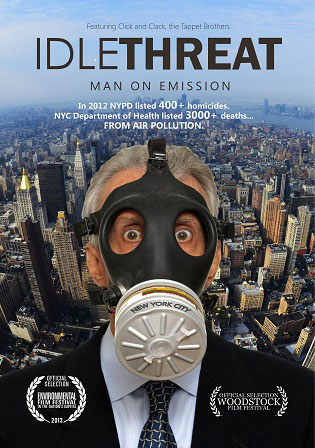 ORGANIZE A SCREENING OF IDLE THREAT: MAN ON EMISSION
If you’re inspired by George Pakenham’s story and want to see the movie or organize a community screening, you can order a copy through The Video Project. Watching the film is a powerful learning experience and can be a great springboard for collective discussion and action.

Composting at Home with Terra-Cotta Pots – A D.I.Y. Guide

Get you compost on with this easy, eco-friendly guide to building a terra-cotta composting system.
Continue Reading
Eco Living

Some of the ways the Olympics are going green are just as exciting as the games themselves.
Continue Reading
Eco Living

Looking to make your garden as low waste as possible? We’ve got a few tips to help you make the...
Continue Reading